A Traveller’s Thoughts on Transport, Time & Our World

I am a Swiss musician currently studying in Canberra for half a year. I chose to travel from Europe to Australia on a cargo ship as a passenger. A large cabin, nice meals and a lot of time on your own are the main ‘ingredients’ of this means of transport. It took me a while to slow down into the rhythm of life on board but what seemed first to be ‘empty’ days turned out to be a period filled with many different experiences; the most fascinating being the gradual change both of climate, and of the stars in the sky. “Why would you do this?” was an often-heard question before I left. We are used to travelling equivalent distances in airplanes; we know the time that such journeys take, and we can compare different fares. How do we compare 24 hours of flying with the same number of days on board a ship and a fare that is significantly higher? What is ‘normal travelling’? What is the impact of the two modes of transport on the environment? What is the effect upon our own feeling of time and space? What do cargo ships transport? Is what they transport necessary or needed in their destination countries? Having seen the thousands of containers on a cargo vessel (the size of this was beyond my imagination) these questions, and many others, occupy my thoughts. This is enriching. 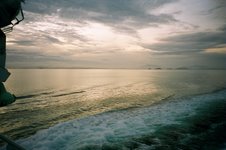 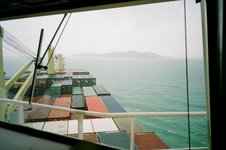