Important Gathering, THIS Wednesday 23rd Jan, from 7am.

Bring your symbolic bike made from cardboard to Castlemaine station and tell your cycling story with others. Come share a cuppa and then board the 7.49am peak hour train service to Bendigo to get the message across to V/line that they must withdraw the ban. We expect 100 or more cyclists and supporters to be gathering in Central Victoria! See link for ideas. Cardboard can be found at bike shops or the tip. Go recycle to cycle!!!!!! 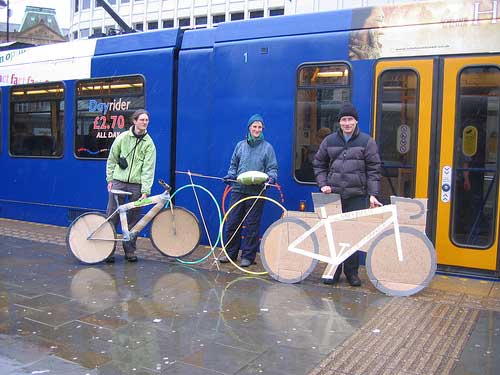 Bin the Bike Ban action meetings: V line’s decision to ban bikes on peak services has been covered extensively in the media. At a meeting at MASG on 14th January, 20 cyclists agreed to ask V line to:
1. reverse the current ban, and
2. open the doors to ongoing discussion and consultation on public transport, commuting and bicycles.

The action plan includes:
1. Emails, letters, petition and deputations to local and state Government reps and departments.
2. Invite a V/Line representative to a public forum/consultation on the issue.
3. On going long term campaigning and meetings to look at the longer term issues and discussions with Vline and Public Transport officials.

The group will be meeting again at MASG, 6.30pm, Monday 21st January.

Background
Your support and committment is being sought on this issue which goes a long way to finding immediate to long term solutions to addressing ongoing environmental/sustainable transport. Transport is about 15% of Australia’s greenhouse gas emissions, and about 17% in Central Victoria. If a person who normally cycles to the station in Bendigo, trains and then cycles in Melbourne, now has to drive all the way, then that would create an additional 28 tons per year, approx, and for someone commuting by car between Bendigo and Castlemaine it would be about 3 tons per year