Over 300 people packed out the Theatre Royal on Saturday night July 8 to hear a stellar cast of musicians and to raise funds for the newly formed Mount Alexander Sustainability Group.

The “Switched on? Switch off!” concert, which had been organised by the Theatre Royal’s David Stretch and the Sustainability Group’s Doug Falconer, raised around $5,000.

“One of the exciting things about the concert”, said the Sustainability Group President, Neil Barrett, “was that we had many local musicians of amazing talent who donated their time and skills to the fund raiser. These included the CSC String Quartet, Saul Roche and members of the ‘Both Sides Now’ Joni Mitchell tribute group. ”

“In addition, Shane Howard and other out-of-town musicians such as Toby Burke, Sarah Carroll, Marcel Borrack and Mick Thomas added exciting material and talent. Doug and David are to be congratulated on their efforts in getting together all the amazing talent.”

The audience were able to look at two electric/petrol hybrid cars on the way in, as well as a ute running on biodiesel that Cr Tellefson from Buloke Shire had brought along to show.

A bike provided by Jason from Castlemaine Cycles was raffled at the concert.

“Having these energy efficient forms of transport was an opportunity for the audience to see how we can use less energy”, said Neil. “The Sustainability Group will be working with the community, including businesses, to help reduce the shire’s impact on climate change and to help strengthen the resilience of the community as energy and water become increasingly more expensive or scarce.

The bike raffle was drawn by the Sustainability Group’s new coordinators, Carolyn Neilson and Dean Bridgfoot.

“This community has so much enthusiasm, talent and ideas and we are very much looking forward to working with you”, said Carolyn.

Cr Jim Norris donated a large Manchurian Pear tree to be auctioned and this raised over $350. 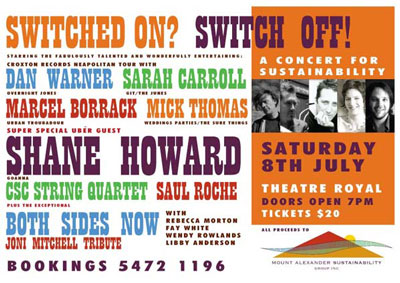