It’s a cool & overcast afternoon in Campbell’s Creek & 10 MASG members are  out door knocking as part of the National Door knock to Unlock Clean Energy, part of the 100% Renewable Energy Campaign.

Getting ready to door knock for 100% Renewable Energy

We could be at home, catching up on chores, hanging out with the kids, pulling out the weeds…..a million other things, but like hundreds of others we are volunteering with the 100% renewable energy campaign in cities & towns right across Australia, and we are out talking to people in their homes about renewable energy, about what this country could be like and most importantly, listening to what they think our political leaders should be doing.

This is just some of the quotes from what the people of Campbell’s Creek told us this afternoon.

This is their words when asked what THEY would like to tell our elected representatives when we gave them the results of our survey:

Get real, this is life or death…we need a higher rate of carbon tax, not something too piffly

Go ahead with Renewables. God gave us a brain, it’s up to us to use it, there has been enough talk. (Mary 92 years old)

For God’s sake get your act together. Too much pussyfooting around, just get on with it.

If solar was reliable enough and affordable I would support it

Cleaner energy is a good idea, but it must not impact on the poor

It’s the way of the future, take action now

Have a crack at it, change happens

Take it to parliament and give it a go

Push it and go ahead, stop pandering to the lowest common denominator

Keep up with the promise to assist solar and wind

We need to act now. We need to be proactive in our decision making

Get on and do it

Get off your butt and do more

Invest in renewable energy will be dollars positive

We need to start moving to address climate change now and not deny it. Start doing it!

Chris and Deb in Campbells Creek

This weekend the Multi Party Climate Change Committee was meeting in Canberra. Over the next four weeks they will decide whether the revenue raised from taxing Australia’s 1000 biggest polluting companies will be used to build a renewable energy future….or go back to line the pockets of the big polluters.

So as I’m typing in all the results of our door knocking conversations I’m looking forward to these results joining with the thousands and thousands of other surveys undertaken by groups from right across Australia.

I’m looking forward to seeing those results tabled in Parliament.

I’m looking forward to presenting the results of today’s survey and asking our local MP, Steve Gibbon, to stand up for us and demand  that his  Government uses a substantial amount of the revenue from the pollution price drive new investment in renewable energy. 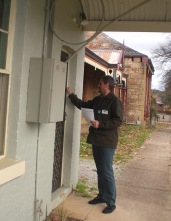 Steve at the door

And I know that Mary & her neighbours in Campbell’s Creek, and the hundreds of others we have spoken to in the Mount Alexander Shire over the last few months, are looking forward to hearing back from Steve Gibbons. They want to know what he is going to do to ensure that his Government represents the people & not the polluters.