Growing The Harvest is Better Than Digging Brown Coal

As we move into Autumn, it’s time for The Growing the Harvest Festival  14th & 15th April.

This is a great opportunity to appreciate locally grown foods, and learn more skills around growing & preparing foods.  Workshops, stalls and demonstrations, a Harvest Café, Harvest Church services, and a community Apple Juicing…….and more. Why not start the Festival with a new feature – a walking meditation of 4 productive gardens with Cath James and Rev. Ken Parker leaves from Uniting Church Hall, 9am, Saturday 14th April.  1 hour walk. Cost: Free

MASG PV owners have their say on Feed in Tariffs

Thanks to all the PV owners who responded to the call for submissions to the State Government Feed in Tariffs inquiry. At least 24 people put in emails and as of Monday 19th March. Considering there were only 30 submissions at that stage MASG members have certainly made a solid contribution to this process. Well done! Other submissions clearly indicate that respondents want to keep the tariffs in some form which encourages the uptake of PV for everybody. They can be viewed here, then click on Feed in Tariff Inquiry, then Submissions Received.

With the NSW government considering a Feed in Tariff of 5 to 10 cents in a similar inquiry (story) it will be ‘interesting’ to see which way the Victorian government goes. The relatively small number of total submissions indicates that most people are unaware that there is even an inquiry going on.

The Hub Plot garden group meets Monday mornings from 9 a.m. – with cuppa and produce exchange at 11 a.m.  All welcome

Last Monday, at the Hub Plot, the Castlemaine Abundant Kitchen Enterprise (CAKE) group, the Growing Abundance Harvesters and The Hub Plot gardeners got together for a shared lunch.  We shared a wonderful lunch of home grown and home made goodies – but is was the meeting and sharing with people from the various projects which made it special. 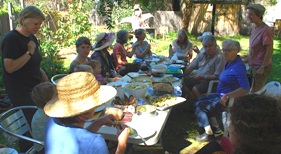 Things we’ve been doing at the Hub Plot :

• Getting the patch ready for planting garlic

• Some of us have been drying and bottling tomatoes.

Penny Woodward workshop at the Newstead Community Garden on Sunday.

A couple of us attended the and here are just some of Penny’s tips:

• at the first sign of a cold, sage steeped in hot water, with lemon and honey, does wonders

• yarrow, chamomile, nettles and comfrey are all great additions to the compost to both sweeten and activate.

Plot Raffle:  Don’t forget to get your tickets in our raffle.  First prize is a $500 gift voucher from the Bold Garden Nursery,  2nd prize is a $100 gift voucher from Green Goes the Grocer and 3rd prize is a $50 voucher from The Good Table. We’d like to thank the businesses for their generosity in donating these wonderful prizes. If you would like to buy tickets or can assist with selling tickets please call into the MASG office or phone Kerry on 54 706978.  Thanks to those who have already taken raffle books.??Thanks for the offers which we’ve received so far for volunteering at the Growing the Harvest Festival: if you would like to join in our team of volunteers on the day please contact Heather on 0409 327791 or heather@box311.biz

Food for Thought – it’s back!

Films & discussions on the theme of sustainable food, presented by the Growing Abundance Project at the Castlemaine Ray Bradfield Room, Castlemaine.  Entry by donation. Come along, watch a film and get involved!

A profound look at the global bee crisis – the film journeys through the catastrophic disappearance of bees and the mysterious world of the beehive. It is an ultimately uplifting film which weaves an unusual and dramatic story of the heartfelt struggles of beekeepers, scientists and philosophers from around the world

“We encourage you to recognise and celebrate the achievements and contribution of the young people in your organisation or in the community by nominating them for a Sustainability Champion Award.

Cairn Curran – have your say:

Goulburn-Murray Water is currently developing Land and On-Water Management Plans for its water storages around Victoria.  The Cairn Curran Reservoir plan is being developed during 2012.  The Regional Development Company has been engaged by G-MW to facilitate a variety of consultation activities with the community, landholders, local groups, agencies and stakeholders.  Attend the ‘Have a say’ meetings or arrange a phone conversation – details from Tanya on 57 22 2207 or complete the on-line survey.

Cultivating Sustainability is a 1-day workshop for anybody who has taken on the challenge of influencing others to live and work more sustainably.  Aims to provide sustainability advocates with insights, models and tools to engage and inspire people for sustainable action.  Tue 27 March 9.30am – 4.  Presented by Tim Cotter, a psychologist specialising in the psychology of sustainability.  info here, or email info@awake.com.au

Legal Issues in Managing Volunteers on Thursday, April 19 from 10:00am to 4:00pm in Bendigo – designed for volunteer managers and those involved in coordinating volunteers in a NFP organisation.  Draws on current case law and hypothetical examples, and provides participants with template documents for use in their volunteer programs.  $50 per participant or $25 for VCOSS members. (Fees can be waived for organisations unable to pay)  To find out more and to register visit http://www.vcoss.org.au/clearinghouse/training.html

Comedy:  HOW MANY POLITICIANS DOES IT TAKE TO CHANGE A LIGHT BULB?

Internationally acclaimed comedian Matt Grantham asks that very question and explores whether two Independents and a Green would actually speed up the process. From politics to health and safety, Matt asks: “How have we ended up in a situation where we have an unused desalination plant currently outpolling the Prime Minister?”  A must see show for those who prefer political laughs over laughable politicians. Fundraiser for Beyond Zero Emissions –  Friday 30 Mar, 6.30pm

Private solar array leads the way: A 400kW solar PV system – said to be the largest privately owned rooftop system – is to be constructed on a new data centre in Port Melbourne.

Brown Coal Tender  Plans by the Baillieu Government to allocate billions of tonnes of brown coal and run a taxpayer-funded PR campaign to improve the image of coal mining and power generation were unveiled this week.  Read Environment Victoria’s response:

In contrast, the STATE OF THE CLIMATE 2012 paper produced by CSIRO and the Australian Bureau of Meteorology shows that our long-term warming trend has not changed, with each decade having been warmer than the previous decade since the 1950s. The world’s 13 warmest years on record have all occurred in the past 15 years.

* Each decade has been warmer than the previous decade since the 1950s.

* Australian annual-average daily maximum temperatures have increased by 0.75 °C since 1910.

* Australian annual-average, daily, mean temperatures have increased by 0.9 °C since 1910.

* Australian annual-average overnight minimum temperatures have warmed by more than 1.1 °C since 1910.

The science behind southeast Australia’s wet, cool summer: most parts of Australia have experienced exceptionally heavy rains over the past two years, filling many dams around the country and breaking the drought of 1997–2009. There has been much confusion in the media about what this means for climate change. This report seeks to set the record straight.

MORE than a quarter of South Australia’s electricity was generated by wind last year, up from 18 per cent in 2010 and 1 per cent five years ago.  ”it does seem to have displaced coal,” Dr Bethune said. Gas-fired generation has fallen a bit, but the big fall has been in coal.”  Full story

Heat Wave Sizzles On, Toppling More Than 2,000 Records   Records continue to fall across much of the U.S., as the extraordinary March heat wave rolls onward. The warm weather, with daytime high temperatures close to 40°F above average in some places, set the stage for severe thunderstorms that spawned rare, damaging March tornadoes near Detroit.

Second hand books for literacy: if you have books that want a good home, or you are looking for a second hand book try here.  They accept your good old books, pay for the shipping and will then either reuse them, recycle them or sell them.  The $ raised support literacy projects across the world.  Happy reading!

James Hansen arrested: “Why I must speak out about climate change”

Top climate scientist James Hansen tells the story of his involvement in the science of and debate over global climate change.  Great TED video

Blog of the Week – Carbon footprint of a bike:

Quote of the Week

A spokesperson from the Mount Alexander Sustainability Group  stated that they are not funded by the CIA and are opposed to the Baillieu government plans to allow Brown Coal to be mined and  exported from Victoria.  Mr Bridgfoot said:

“Given that the governments of the USA, China and India are all predicting that solar power will be cheaper than coal based power within the next 8 years now is NOT the time to trash Victorian farmland and wreak further climate havoc just so a few companies can make a quick buck.

We should be investing in solar and wind, after all they are the only power sources that will get cheaper the more we build”