Haggis and the origin of Origin’s energy

Open up and read the e-news! Please send your contributions for the next e-news to e-news@masg.org.au by 11am on Wednesday, 28 November.

In this issue we have a decidedly arts theme, not to ignore our renewable energy theme, and a bit of haggis hurled in. Enjoy. But more important: Act!
Get involved. 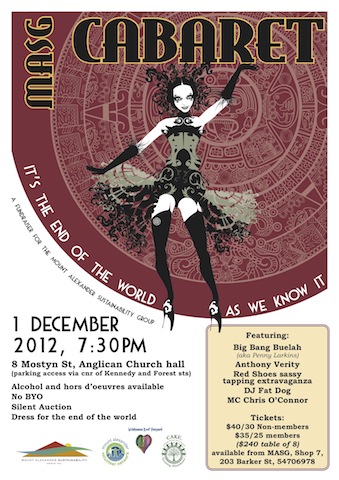 It’s the End of the World as we know it Cabaret – and we want you!

Get set to rock your socks off on 1 December at the Anglican Church Hall with a mixed line up of tantalising performances from our very own Big Bang Buelah (aka Penny Larkins), Anthony Verity and the Red Shoes (sassy tapping extravaganza).

Dance the night away to the groovy tunes of DJ Fat Dog, enjoy tasty sustainable treats made by CAKE and volunteers and partake in local alcohol by Welshman’s Reef and others.

Get all your Christmas presents and feel good about yourself at the same time by purchasing goods from our Silent Auction.

Get involved in the end of the world! Come along! Volunteer!

This is a fun opportunity and we’re still seeking volunteers. We’re looking for a crew to help with decorating, publicity, tech, set up and pack up, and other general coordination. Contact Alex on 0439 946 007.

Check out the poster above, and get your tickets now from the MASG office!

Interested in working with us on the State Festival? In 2011 we ran a ‘green ticket’ initiative, and this (2013) festival we’d like to run something similar … or completely different!

The State Festival draws over 40,000 people, and is a extraordinary opportunity to get MASG and our message out there. Let’s get a project up! We’re open to your ideas and would love to hear from you. Let’s get our presence out in 2013.

A short video (1 minute) explaining all this is here:

And the results of the vote are an overwhelming vote for a stronger renewable energy target in Australia.

Which brings us to: 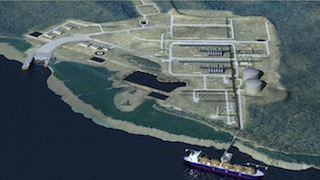 Despite expensive solar and wind advertising and a clean, green image, Origin Energy owns less than 1 per cent of its generation in solar and wind. Fully 95% is via coal and gas. CEO Grant King has played a very public role in trying to water down the RET.

Dean Bridgfoot from MASG was among a group of renewable energy campaigners who confronted the Origin Board at the company’s recent AGM, asking the hard questions. 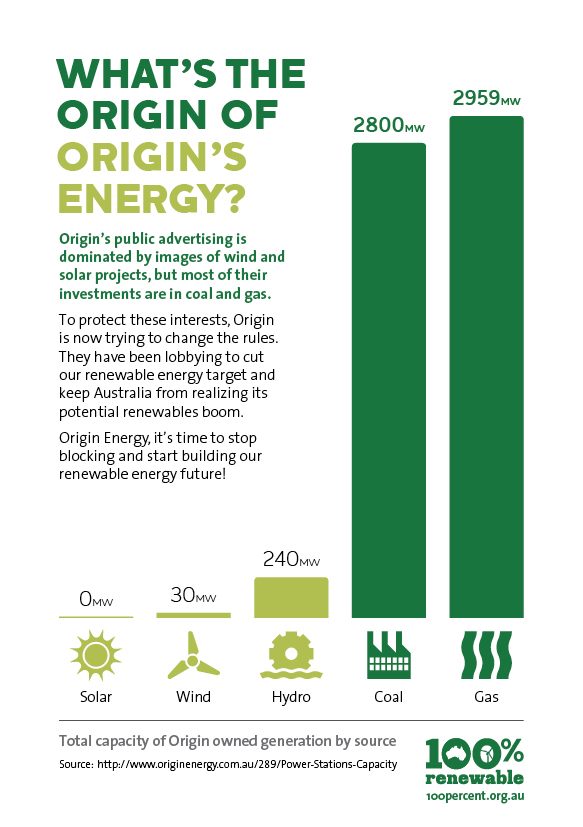 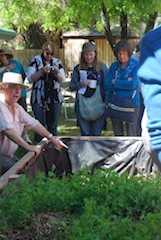 At the wicking bed workshop

Whew! We seem to have had an extraordinarily busy time lately.

Thanks to everyone who worked so hard to get things ready for the Garden Festival open days, who volunteered at the open days and who helped out at the wicking bed workshop.

Thanks especially to Peter who conducted a master class – or I should say masterful class – on how to make wicking beds.  Peter set up scientific displays on the principle of wicking, he made a cross section model of a wicking bed and he showed a number of small scale wicking beds. The workshop was attended by over 30 people and many helped build our new wicking bed in an apple crate.

On Monday we had a visit from the Nagambie garden group who are interested in setting up a demonstration food growing garden. Thanks for the volunteers who brought food to share.

We just received a wonderful thank you email from the group: ‘Thank you for your warm welcome, sharing of knowledge and cuppa.’ 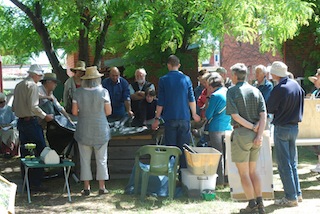 Our produce exchange is ramping up now with broad beans, cauliflowers, globe artichokes and eggs featuring this week.  If you have produce or seedlings or recipes to contribute come along on Mondays at 11am.

Over the next few weeks we will be filling up our new wicking beds and getting everything watered and mulched for the summer. 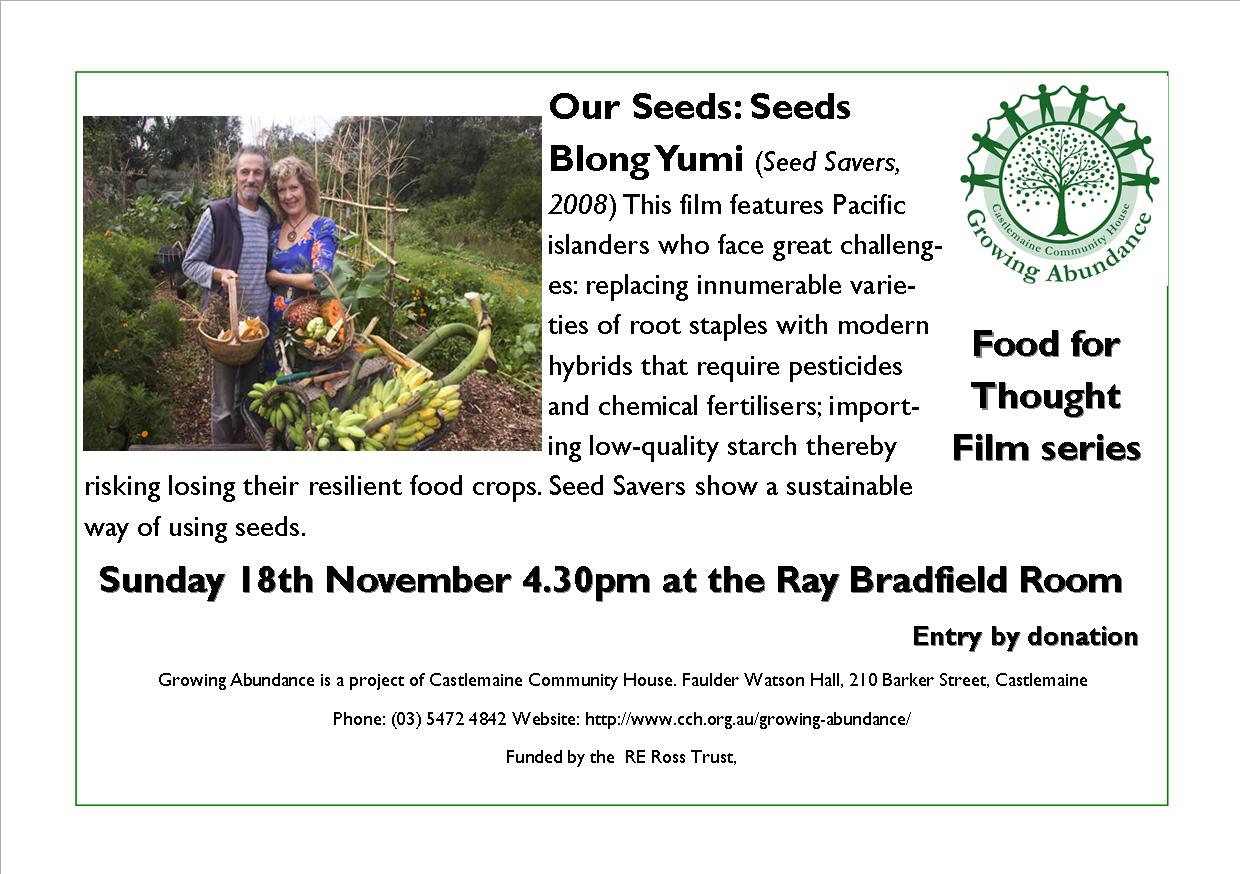 Powered by haggis? Scotland aims for 100% renewable energy by 2020 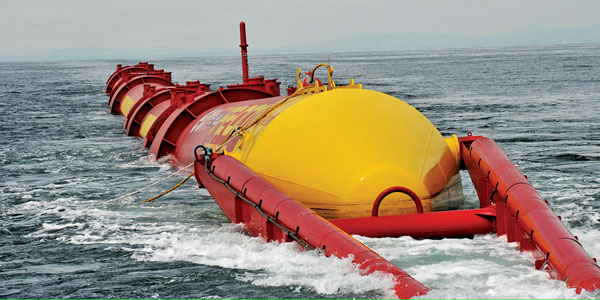 Scotland (rainy, wet country north of Manchester?) has set a goal to meet half its electricity demand from renewable sources by 2015, after reaching 35 percent last year, according to Alex Salmond, Scotland’s First Minister.

The target is an interim step in Scotland’s effort to get all of its power from clean sources by 2020, after beating its 2011 goal of 31 percent, according to data from the UK Department of Energy and Climate Change. 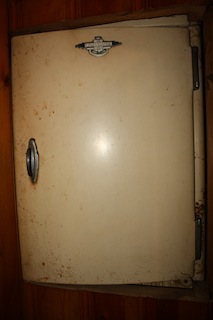 At the Phoenix Fridges warehouse in East Brunswick, two long rows of fridges face-off like football teams before a big game. On the left, a refurbished line-up is clean, efficient and ready to run. On the right, the dusty, sticker-covered new recruits will soon face their ultimate test.

Come to a free Community Forum and listen and be inspired by the ideas of young people from the City of Greater Bendigo and Mount Alexander Shire which will accelerate the transition to a more sustainable future.

More information on the programs can be found at: www.climatechange.gov.au

Looking for growth in renewable energy? Not hard to see …

German solar power generation up 50 per cent in 2012. Germany’s solar power production has risen by more than 50% over the first nine months of 2012, bringing its renewable electricity generation to 26 per cent.

And the renewable energy sector – solar, wind, hydroelectric, geothermal and biofuel – continues to attract huge investment. In 2010, a total of US$243 billion was committed to this sector worldwide; this is projected to rise to US$630 billion by 2030, creating as many as 20 million jobs in the process. 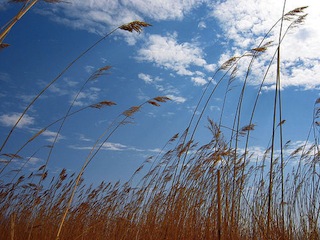 Conservation is getting nowhere because it is incompatible with our Abrahamic concept of land. We abuse land because we regard it as a commodity belonging to us. When we see land as a community to which we belong, we may begin to use it with love and respect.

« AGMs, priceless volunteers and solar hot water | The AGM is upon us! »