Switch on to our e-news! Switch off fossil power. The next e-news will be published on Thursday, 3 July, so get your contributions in to us then, by 11am.

This week we launch our inaugural DIY sustainability section: Get your house in order! And in future editions we’ll be looking for your DIY tricks and tips. The very best will win a prize: morning tea for two (coffee/tea and cakes) at The Bakery, the delightful new café behind MASG and the Enviro Shop at 325 Barker St.

So don’t hold back with your sustainability – and toasty – ideas for your home. Coffee and cake could be yours for the taking.

Got a sustainable house? Have some neat tricks to save you energy? MASG is looking for people who would like to be involved in this year’s Tour, which will be held in conjunction with Sanctuary Magazine’s nationwide Sustainable House Tour in September. 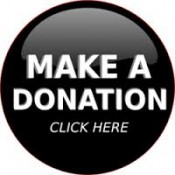 We’re nearly at the end of the financial year, so this is your last opportunity for 2013-14 to donate to MASG, to help us keep up our great work on climate change, renewable energy promotion and waste minimisation. We’ve also played a strong role promoting the RET and the Victorian RET, on the abolition of the wind no-go zone, and supporting community-based renewables initiatives directly with Coalition and Shadow politicians and candidates.

Help us continue this work: and any donation you make over $2 is tax deductible.

Email Anna, call her on 5470 6978, or donate directly using the Give Now secure online donations service.

We’d love to hear from you! 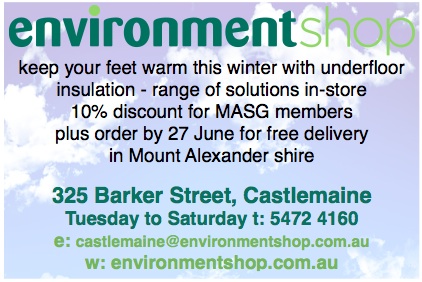 This Saturday is the Village Winter Festival, and MASG will have a prominent presence with our Wash Against Waste Trailer. We’d love you to come along and help out. Contact Anna if you can even give an hour of your time – and you’ll get free entry into the Festival to boot. 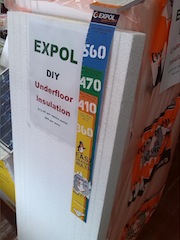 Get your house in order!

It’s all very well to rail at the big polluters, and send the banks threatening letters, but is your own house in order?

This week, it’s getting cold. Up to 35 percent of your home’s heat can escape through doors, windows, walls and ceilings. While it’s easy (ish) to insulate your ceiling, it’s a little more difficult to get under the floor (impossible in some homes).

Topping up or installing insulation in your ceiling is the easiest and most cost-effective way to insulate your home – it can save you up to 2,090kg of greenhouse gases and $350 a year. Insulation is an excellent year-round investment because it will keep your house warmer in winter and cooler in summer; reducing the need to spend energy and money on heating and air-conditioning.

Insulating underfoot can make a huge difference in comfort, and save you up to 12 per cent on your heating bills.

Expol DIY underfloor insulation is a relatively new underfloor product that fits neatly between your floor joists, as it has clever little expanding tabs on the sides. It has great thermal properties as it consists mainly of stabilised air. Safe to install, non-allergenic, it has an R value of 1.4 and it contains a flame retardant. Its thermal performance is not affected by ageing, and it contains no CFCs. Read more: http://expol.com.au/underfloor-insulation/existing-homes

It’s that time of year: overcast, murky skies, cold mornings, feet by the fire, and school holidays. The MASG office will be closed for the first week of July, but we’ll be back on deck from Monday, 7 July. We’d love to see you then.

Australia posted its biggest annual reduction in greenhouse gas emissions in 24 years of records in 2013 as the carbon tax helped drive a large drop in pollution from the electricity sector.

The latest greenhouse gas inventory, released online without fanfare by the federal government, showed annual emissions excluding changes in land use were estimated at 538.4 million tonnes of carbon-dioxide equivalent in 2013, down 0.8 per cent on the previous year.

The only sustainable use of coal we can think of

Yes, that’s right! The age of entitlement is over for single mums and pensioners, but The Victorian and Federal governments have just given $25 million to a massive Chinese state-owned company to develop more Latrobe Valley brown coal.

Shanghai Electric will be announced on Monday as the final winner of government grants for new brown coal pilot projects. It promises to build a $119 million demonstration plant to process coal into briquettes.

State Energy Minister Russell Northe said: “Victoria is home to one of the world’s largest brown coal reserves and this joint investment will enable the development of new, smarter, cleaner and sustainable uses for this important resource.”

China and the UK have vowed to act decisively on climate change, accelerating the momentum towards an agreement in Paris, and hastening what China premier Li Keqiang describes a global energy revolution.

Li and the UK Tory Prime Minister David Cameron recently issued a powerful combined statement, underpinning their commitment to climate action and clean energy and, in doing so, directly contradicting nearly everything that the Australian Prime Minister has said on the issue of climate change.

The start of the climate change class actions?

The threat of legal action against governments which haven’t prepared for climate change impacts, like flash flooding damaging infrastructure, is real. As communities in Illinois are discovering.

Taradale Primary School is the second site for The People’s Solar, the great project that helps community organisations reduce their energy bills and use the savings for community benefit.

“It’s really a simple program, and we’re delighted to be participating,” said Chris Burgess, Principal of the Taradale Primary School.

The project follows hot on the heels of the successful installation of panels at the Castlemaine Childcare Cooperative. To donate to Taradale Primary School’s solar panels, go to http://www.thepeoplessolar.com/taradale-primary-school/

The silent turbine that could generate half your home’s power

While wind power is one of the cleanest sources of renewable energy in the world — and the top source for new US electricity generation as of 2012 — many people still take issue with turbines and their noise. Though some people living near turbines say that the low hum doesn’t cause much trouble, others report daily annoyance, with some controversially linking the noise to physical ailments.

But Dutch company Archimedes has set out to change that mindset by releasing the Liam F1 Urban Wind Turbine, a $5,400 model set to roll out next January. The company promises to boost efficiency and cut your electricity bill, while making little to no noise in the process.

Leading international agency says Australia should become one of world leaders in renewables, arguing that the world could double renewable capacity by 2030, save money and slash emissions in the process.

The International Renewable Energy Agency has finalised its ground making REMap 2030 report, confirming its previous estimates that the world could double its renewable energy capacity by 2030, which would not only save money, it would help avoid climate catastrophe.

Earthworker is producing high quality solar hot water systems, and each unit is a step toward manufacturing in their first worker-owned factories.

They have the opportunity to jump to the next stage in their journey, to transform their small business partner factory in Dandenong into an Earthworker Cooperative factory, beginning the transition into the ‘Eureka’s Future’ worker-owned cooperative. This will also assist them to expand manufacturing of solar hot water tanks into Morwell, providing sustainable jobs in the heart of Victoria’s coal-producing Latrobe Valley, and in Geelong, where the existing car manufacturing industry is on the verge of closing.

This opportunity is open to us for a short matter of weeks, which is why they need help. 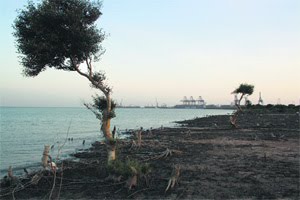 Adani is the company that wants to be trusted with the world’s biggest coal port on our Great Barrier Reef coastline.

Can you watch this video, then share it with as many people as you can? Adani still needs to borrow billions of dollars to make this project happen, and we need investors to know exactly who they’d be dealing with.

« World Environment Day: Jewels in the Crown at Risk | Better and better news »