The next e-news will be published on Thursday, 19 February, so get your contributions in to us then, by 11am. 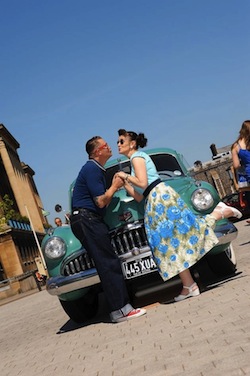 We’re planning a Members Forum for 26 March at 7.30pm, with the venue yet to be announced (most likely one of the church halls in town). What would you like to see MASG doing in 2015? How can you be involved? Should we shift our focus?

Come along to our Members’ Forum and find out what MASG’s possibilities are for 2015. Keep an eye on this site to find out more details.

One of our goals is working towards zero emissions for this shire and for the planet. While some of you may (cynically) think the whole planet is a big ask, and we may be inclined to agree with you, we are also supporting Council in their sustainability goals. So, small steps, and lots of them, add up to great leaps.

We have been focusing last year on some projects that we hope will start bearing fruit soon.

A framework for mapping renewable energy resources within a community has been developed and prototyped at Baringhup. This framework can be applied at other localities within the shire and elsewhere.

The process, when applied to Baringhup, identified the potential for bio-energy, bio char, biofuel, solar, hydro and micro-wind. We compiled data on the type and volume of crops and residual wastes, and investigated the opportunities that these presented.

Another possibility may come from our discussions with AGL, which owns a hydro plant at Cairn Curran, to discover if there are any opportunities for the community to take over joint management or ownership of the plant. It is attached to the dam and AGL do currently use it, but it is a minuscule part of their generating capacity. It provides around 3000 MWh a year – energy for up to 450 houses.

We expect to release the report showing the comparative viability of these possibilities to the Baringhup community in late February or March.

The framework will now be applied to the shire more broadly and we have identified a priority list of precincts which we will target for detailed mapping. These include:

Mapping the demands and resources of this precinct is a lower priority but will be picked up at a later time. The council plans for the pool are in the early stages of planning and will influence when we pick up this task. Some analysis has been done here as part of the Maines Power project.

Detailed mapping of resources and demands will start in February and engagement with the stakeholders is underway. Castlemaine’s sewage farm requires energy to run and is nearing capacity.

MASG has begun discussions with Coliban Water about the possibility of initiating a project to ensure that as much local energy can be generated as possible from the wastes ensuring a win-win for all. We will also revisit the opportunities that may exist to include organic wastes from the landfill nearby. There is a significant amount of industry in the precinct and the demands of these will be looked at also. 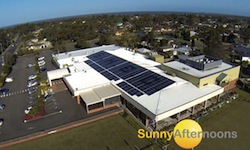 Community owned Solar (Behind the meter)

You may have heard of the Shoalhaven Bowls Club, where the community rallied to install 99-kilowatt solar plant on the club’s roof. It was completed in August 2014 and now supplies over 30% of power to the local club.

MASG is investigating that kind of model for this shire. We have initiated discussions with some of the larger businesses, about their installing large-scale solar, and we are seeking interest from businesses and the community. Should these organisations be interested in the investor model, and members of the local community can invest funds and receive commercial returns on that investment, then we will be able to facilitate this. 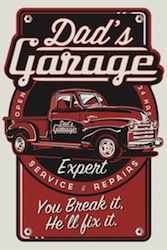 MASG needs to store a few things, one of them being a marquee for the Wash Against Waste trailer. We will need access to that fairly regularly, so a garage that we could access would be great.

In 2015 the Castlemaine Environment Shop will be running a free workshop each month on a different sustainability topic. The January session on Keeping Your Cool was a big hit and is being followed by a session in February called Understanding Solar and Solar Hot Water.

‘We have lots of people coming into the shop who are either interested in setting up a new system or having problems with an existing solar or solar hot water system,” said workshop coordinator Jane Knight.

“The workshop is designed to explain how these technologies work, how to get the right product for your needs and to answer people’s questions.” 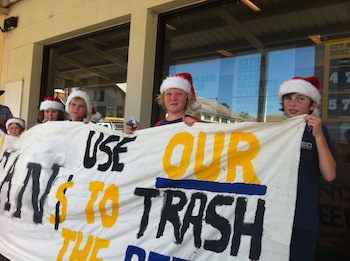 The local branch of 350.org got busy before Christmas to protest outside the Commonwealth Bank and their plans to be the organiser for loans for the planned Galilee Basin coal mines

On Saturday, 14 February at 12 pm, the Castlemaine branch of 350.org will launch the Central Victorian Fossil Fuel Free Charter on the steps of the Castlemaine Market Building.

The Charter invites individuals, businesses and community organisations to make a public pledge to move their business away from the big four banks, electricity retailers and super funds that are actively funding the expansion of fossil fuels and drive climate change.

“The charter is also a great way to encourage and challenge each other and inspire new supporters by making a public pledge to take action by doing business only with climate friendly organisations.”

Come along! Saturday, 14 February at 12.30pm on the steps of the Market Building Castlemaine. 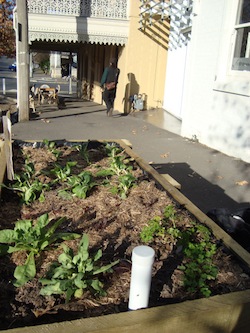 Would you like to see more veggie wicking beds in the centre of Castlemaine? VOTE NOW!

The Hub Foundation (the same crowd that’s behind the MASH solar project and the wicking beds on Templeton St) are thinking of increasing the number of wicking beds on the footpaths around town and we would LOVE to know your thoughts.

Vote on this poll and please let them have your comments too.

This is a project that Council is considering, so your feedback will be useful.

Please take a few moments to complete the survey.

Looking for a cure for climate change? Try Carbon Sequestration

Why solar costs will fall

It’s been one of the big themes at the World Energy Future Conference recently in Abu Dhabi. Solar, and other technologies such as wind power, are no longer more expensive than traditional fossil fuels in many parts of the world. Indeed, they are cheaper. 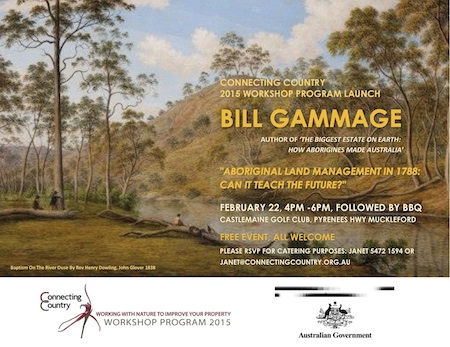 Bill Gammage in Castlemaine:  ‘Aboriginal Land Management in 1788: Can it teach the future?’

Bill’s most recent book, The Biggest Estate on Earth. How Aborigines made Australia pieces together details of land management strategies from around Australia, coming to the conclusion that Aboriginal people managed the land in a far more complete, systematic and scientific way than has often been recognised.

The launch will be followed by a BBQ dinner to celebrate the start of Connecting Country’s ‘Working with Nature to Improve Your Property’ Workshop Program for 2015.This is a free event and all are welcome. Please RSVP to Janet 5472 1594 or janet@connectingcountry.org.au. It has now moved to the Campbells Creek Community Centre.

Climate activism with your mouse

Right now we have one of the best opportunities we’ve ever had to stop the world’s largest coal port being built on the Great Barrier Reef. But we need to act fast.

It looks almost certain that the ALP has won Government in Queensland, following Saturday’s historic election which swept coal-loving Premier Campbell Newman out of office after just one term.

Click here to tell the ALP to say no to devastating coal projects on the Reef today!

Under Newman, plans to build one of the world’s largest coal ports at Abbot Point, in partnership with Indian mining giant Adani, were racing ahead. Abbot Point would provide a gateway for coal companies to unlock nine new mega coal mines in the Galilee Basin that would triple Australia’s carbon emissions and devastate the Great Barrier Reef.

Last weekend in Queensland reinforced something we’ve known since the beginning: when solar owners, workers and supporters are organised, coordinated and represented, they can win.

Solar Citizens know 2015 will be the biggest year yet for the future of solar, and are determined that this future will be a sunny one. But they can’t do it without your support. Will you chip in $20, $30, $50, or whatever you can afford, to our 2015 solar protection fund?

Feeling generous? Donate $100 or more and they will send you a limited edition Solar Citizens T-shirt to brighten up your day.

We are in the coal business. If you want decent hospitals, schools and police on the beat we all need to understand that.