You Are Invited to Finding Our Power – all MASG members are invited to be part of this forum to share ideas and discuss opportunities for the renewable energy future of this area. Locally-based renewable energy solutions are a fundamental part of MASG’s vision for a sustainable future, and we would like you to share your knowledge and inspiration with others from our community. 4pm – 9.30pm, Friday 19th October, and 9.30am to 1pm, Saturday 20th October. Be part of shaping our renewable future!

It is important that you attend for the Friday evening and Saturday morning sessions. The event is sponsored by the Reichstein Foundation and facilitated by Janet Phillips and Jacinta Walsh from Consentric Facilitation. We will feed you with delicious local food – starting with afternoon tea at 4pm, a buffet dinner and morning tea on Saturday. Bookings essential: call Jayson on 5470 6978 or email jayson@masg.org.au

We also need volunteers for Finding Our Power. If you have a good knowledge of setting up and operating computers and/or admin skills, please contact MASG staff on 5470 6978

Email hassles: our service provider has had major problems sending our emails during the last week. Apologies if you have had the e-news late, many times, or not at all. This has been beyond our control and we are using a different system this week.

Solar Cooker Making: one-day workshops: 8th and 11th October 2007: U3A and MASG have joined forces to present two workshops. Workshop numbers are restricted, so bookings essential. Any senior citizen may book with Grace on 5472 1128 or email jillandgrace@bigpond.com Cost is $4 a head. Most materials and lunch provided.

Ride (and Walk) to Work Day on Wednesday 17th October – bigger and better than ever, Castlemaine will be buzzing with the sound of all-terrain bicycles and the clomp of well-heeled walking shoes! Victory Park will have information stalls, enter-tainment, give-aways, display bikes, registration of bikes, Grasshopper Adventure Tours and more. Come along for fun and free breakfast between 6am and 10am. Jill Gibson and her hard working crew need extra help between now and the big day. For more details, contact Jill on 0409 404 791.

Extra Ride to Work event – promotion by Grasshopper Adventure Tours – used and loved by MASG members. Grasshopper will be at the breakfast AND at the Ray Bradfield Room – Tuesday evening 16th October from 6.30 to 7.30 – slides and talk about fun on bikes!

Big Name for MASG’s Renewable Expo (9-10 Nov). One of Australia’s leading experts on renewable energy, Dr Mark Diesendorf has agreed to give the keynote address on Friday night 9th November at Campbells Creek Community Centre. Solahart will be one of the major exhibitors. To make the expo a success, willing volunteers are needed to help set up before and run things during the event. Please call us on 5470 6978 or jayson@masg.org.au

MASG in the International Media – Ashton Hayes wins Clarion Climate Change Award for the Going Carbon Neutral Project: Ashton Hayes (Cheshire, England) Parish Council was one of the three outright winners for the IVCA Clarion award 2007 at a ceremony at the BFI in London. Their short film, Our Footprint, Our Journey was highlighted as an outstanding piece of climate change communications. It was scripted, filmed and edited by Steve Holland and produced by Garry Charnock with support from RSK, DEFRA and the Mount Alexander Sustainability Group in Castlemaine. This is Europe’s top communications award – congratulations to the people of Ashton Hayes.

Theatre Royal Fundraiser: MASG’s fundraiser “Cyclists’ Big Night Out” will be held at the Theatre Royal on Friday 16th November. A showing of the classic film The Bicycle Thief, preceded by some wonderful entertainment, will make this a memorable night for all sorts of cyclists: road riders, mountain bikers, commuters and those of us who are looking for a good excuse to start leaving the Holden at home. Tickets at $20 and $16 concession are available at the MASG office and are expected to sell fast. All money raised will go towards our work on more sustainable transport in the Shire, especially bike use.

CSIRO Energy workshop – Dean will attend the first event of this kind on Friday 12th October, when major energy users in Castlemaine will begin to share information on their energy use patterns.

OTHER NEWS AND EVENTS not endorsed by MASG

Conference for MASG-like groups: The Albury-Wodonga Environment Centre has announced the first Grass-Roots Eco Action Networking (GREAN) Conference to be held in Albury on 24-25 November 2007. It’s shaping up as a fabulous gathering of like-minded people from non-metro environment groups is SE Australia. Preliminary information about the conference and a conference registration form are available from MASG.

Co-housing seminar Saturday 20th Oct., 1:45 – 5:30 pm. Andrew Partos: architect, and urban designer with VicUrban, Victoria’s sustainable development agency, where he is responsible for ensuring that high quality design and environmental outcomes are delivered across a range of projects across Melbourne. Research from 27 communities in Europe and North America, developers and designers of co-housing communities. The Augustine Centre Hawthorn, near Auburn Train Station. Bookings 5996 7065 email jo.hall@ozemail.com.au

Biodiesel – plant will kick off with imported grains. Imported grains will be used initially as feedstock to produce biodiesel at the proposed $50m plant, Australia’s biggest, to be built at Mackay, Qld. Qld Minister for Primary Industries, Tim Mulherin, said imported renewable resources, such as soybean, sunflower and canola would provide the initial feedstock. “Eventually, however, crops will be sourced throughout the region“.

Eat less meat and dairy for C02 reduction? The Australian Conservation Foundation (ACF) are asking us to eat less red meat and dairy, partly to reduce methane levels and partly to reduce the impact of the industry on land and water use. Says the ACF’s Tony Mohr: “Research we’ve done traces back all the steps in the food chain – from plate to preparation to refrigeration to abattoir to paddock to fertiliser – and you find that about six per cent of all household greenhouse emissions in Australia now come from beef and dairy. We think of transport being the big hitter, but emissions from cattle make a reasonably significant contribution.” The Australian 22 Sept 07

Australian Federal Police (AFP) Commissioner Mick Keelty has stood by his claim that climate change is the greatest security issue facing Australia’s future. “As I understand it the Prime Minister has come out today and said they’re both [climate change and terrorism] equally a threat for the future and I agree with that. Climate change is one of those challenges and the significance of climate change is something we do need to look at. Part of developing the capability for the future is understanding what it’s going to look like and positioning the organisation to give proper advice to governments.” 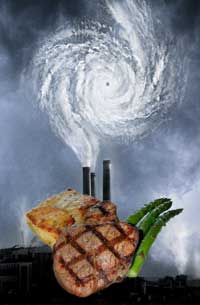