The previously advertised Coordinator position is being re-advertised with modified duties and criteria.  Previous applicants will be considered and need not apply.  The Position Description is available on the MASG website

Applications should be emailed by COB Friday 20th July to Margaret Rasa margaret.rasa99@gmail.com  For queries call 0428 839 100

The rest of the e-news follows:

It is with deep sadness that the Committee and staff of MASG acknowledges the passing of Wendy French of Maldon.  Wendy has been a tireless advocate and worker for environmental and social justice in our region, as a member of the Maldon Urban Landcare Group and in numerous sustainability and climate action projects with MASG over the past 6 years.  She was named as Maldon citizen of the year in 2008 and was co-editor of the Tarrengower Times where sustainability stories and initiatives were a strong focus of the paper.  Family and friends are invited to the funeral service for at the Maldon Community Centre on Monday 2nd July at 1.00 pm. A private family burial service will follow.  Those wishing to see Wendy are advised that her coffin will be open in the Community Centre on Monday between 12.00 and 1.00 pm.  Please feel free to bring some flowers from your garden or a donation which can be made on the day to Wendy’s favourite charities.

Results of the Big Solar poll are in

Dozens of volunteers from Castlemaine and Bendigo spoke to over 1300 people during March and April this year in shopping centres, swap meets and markets as part of a national campaign to support the building of big solar power stations across Australia.

They joined over 50 community groups across Australia in the 100% renewables community campaign working to see big solar built in Australia.

On Monday July 2nd they met with local federal members Steve Gibbons, member for Bendigo, and Victorian Senator Bridget McKenzie at the Bendigo Solar Park to hand over the results of those conversations and call on them to develop bipartisan support for solar power in Australia.

“The north of Victoria has a world class solar resource that could easily power our homes, industries, businesses and communities and provide local jobs. Large scale solar power plants are being built right across the world, but not in Australia.” said Castlemaine mother and campaigner organiser Amy Sattler

“Our team of volunteers in Castlemaine and Bendigo went out on weekends to swap meets, markets, shopping centres and at street stalls to ask local people about big solar.”

“In Australia we make most of our electricity by burning coal and gas. They are finite resources and we have already accessed the cheapest and easiest to get to reserves, which means that electricity from these sources will only get more expensive as we continue to use them up. That means ongoing rising electricity prices for us all. Using Coal and gas also has major health and environmental impacts and causes damage to our water supplies and precious agricultural land. It’s time we did something different” explained local Bendigo campaigner Anne Denham

“We support big solar because we know the cost of solar power is dropping worldwide and in the sunniest continent on earth it just makes sense to use the sun. The fuel is free and will never run out. In fact the more solar and renewable power plants we build the cheaper they will become, putting a break on rising energy costs” Anne added.

“Our survey shows that people want our politicians to show bipartisan support for harnessing our endless solar potential and hurry up and get on with it” concluded Amy.

If you are currently getting income from the PVs on your roof, it may be reduced.  MASG has been working on this issue for some time and we met with the Commissioners of The Victorian Competition and Efficiency Commission at the Hub last week.  In our presentation we emphasized that the method used in NSW resulting in a 6 cents/kWh tariff was an example of market failure that Victoria would do well to avoid.  The round table discussion was to see if they had missed anything before the final report which is due out on the 13th July. This report is confidential, but it is usually out within six months with the government response.

We would like to express our thanks to Deborah, Matthew and Glen who attended the Distributed energy discussion today in Castlemaine.  Although at times we felt that the commissioners may not have agreed with all of the issues we raised and proposals we made we do feel we were able to express our experiences and present our case for how distributed energy generation could be more effectively and efficiently supported in Victoria.

Photographed (l to r) are Glen Hepburn, Deborah Cope, Matthew Butlin from the VCEC and Mike Reeves from MASG.

OTHER LOCAL AND GLOBAL NEWS

East Coast Americans join some Victorians in Canute-like denial.  As reported in the last e-news, some folk are trying to make it easier to build on low-lying shorelines, despite increased risks of those developments going under the waves.

Concerned over regulations that could result from recent sea level rise forecasts, some North Carolina legislators have drafted a bill requiring that future state sea level forecasts be based on only past patterns.  “Trying to ban the use of the best science for sea level predictions is absurd,” said University of Pennsylvania coastal geologist Ben Horton, who wasn’t part of the new study.  NASA climate scientist Josh Willis agreed, adding that such efforts “are sort of a case of human nature trying to outwit Mother Nature, and Mother Nature usually wins that battle of wits.  National Geographic

Who is Worthy of an Award? Sustainability Vic Awards are open for nominations – more

ANTI-WINDFARM LAWS: ARE THEY COSTING VICTORIA? – an updated FoE report to mark World Wind Energy Day shows an estimate of $887

million in lost investment, and 2,100 jobs that will now not be created.

Daylesford Community Gardens – are springing up all over town, and now they have been offered 10 acres at Daylesford school as well.  More here.

“I wanted to let you know that my role as Community Facilitator for the North Central region, along with all the other regional Community Facilitators, will end on 30 June 2012.  State-wide engagement has been identified as a key priority of Sustainability Victoria’s new strategic plan, and a regional facilitation program will commence as of July 1. Regional Facilitators will work closely with regional councils, waste management groups and peak bodies to help them access programs and initiatives delivered by Sustainability Victoria and one will be based in North Central region.

I will continue to be engaged in and about the Central Vic region supporting and contributing to the multitude of awesome individuals that make up our community groups. As many of you know, I have a passion for effective groupwork and relocalisation, and through this focus will, no doubt, see you soon.  My contact phone is 0400 050 399 (remains the same) 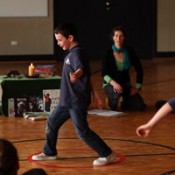 Amazon Calling: Castlemaine resident Helena Read is jumping into international action with a pioneering new Primary school program Jump Up.   She has been invited to Ecuador, San Francisco, Scotland and Bali to share the program with primary students and their schools, now she needs help to make this dream become a reality.  For more info email helena@jumpup.org.au or see the website. www.jumpup.org.au

Local Money – new book which complements their earlier work on local money.  Their other work includes: ‘Interest and inflation free money’ by Margrit Kennedy; ‘The Future of Money’ by Bernard Lietaer.

Now this is a kitchen garden project!

Through telling the story of the White House Kitchen Garden, First Lady Michelle Obama explores how increased access to healthful, affordable food can promote better eating habits and improve health for families and communities across America. Filled with gorgeous full-color photography, “American Grown” will include stunning photos of the White House garden and Mrs. Obama throughout the seasons, as well as other community and school gardens from around the country.

Quote: “My own experiences being a mom, [inspired me to write this book] – trying to feed my kids right. What I realized when I started making some simple changes like … adding more fruits and vegetables. Getting the kids to farmers markets. Engaging them in the process of understanding where their food was coming from. They took an interest, and their health outcomes changed pretty dramatically.”