The next e-news will be published on Thursday, 16 October, so get your so get your contributions in to us then, by 11am.

And, if we’re not being too presumptuous, it looks like great things are starting to happen in New York.

Castlemaine joined the largest mobilisation on climate change in history. On Sunday, the world blew our wildest expectations, with a global climate march six times the size of anything before it! This was 80 city blocks of New York: 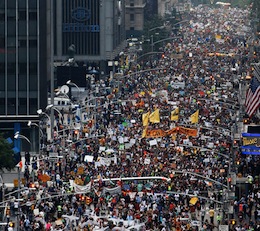 And locally, we enjoyed a fantastic event, with around 500 people joining the action in Victory Park on Sunday.

Among the speakers in Castlemaine was local State MP the Hon Maree Edwards, who later said; “Castlemaine’s reputation as a community that cares about the environment and renewable energy was very much upheld.”

Speakers included Ms Edwards as well as the Hon Lily D’Ambrosio, State Shadow Minister for Minerals and Energy. Both of them gave firm commitments to support renewable energy and the jobs associated with them in this region, should Labor form government after the November election.

Greens candidate John Brownstein and Councillor Jess Howard also attended, and they expressed their concerns about climate change and its impacts on the community, the environment, on increased fire risk, on the current barriers to the development of the renewable energy industry and the jobs it could bring.

Liberal candidate for Bendigo West Michael Langdon and Nationals Senator Bridget McKenzie were also invited to speak at the rally but declined to respond to the invitation.

“The day was a great success, not only for Castlemaine but for people all over the world, who came out in force demanding action from our political leaders on climate change,” said Mick Lewin, Chair of the Mount Alexander Sustainability Group.

You can read the letter here, and we will report back when we have received responses.

The Hub Foundation, Castlemaine, is hosting a free Ride2Work Day breakfast between 7-9am on Wednesday, 15 October.

The breakfast will be at the Hub Plot, Templeton Street, Castlemaine (behind The Good Table).

The emphasis will be on healthy, locally sourced, locally prepared food.  Bring your friends and workmates – and your bike of course!

To find out more about how you can get involved in the Castlemaine R2W Day, visit the website.

This week more than 120 world leaders are gathered in New York for the Climate Leaders’ Summit. With global emissions continuing to rise, it is easy to be pessimistic.

But new research released this week shows that it is getting easier to achieve a very low emissions future for all major countries. Australia could go to zero net emissions by 2050, without compromising prosperity and with new economic opportunities if the world goes low carbon.

With the WasteLess website going live this week, it’s time to get those creative juices a flowing…
There’s heaps of business waste ready to be turned into something special. The website lists what waste items local businesses have to give away for free and how you and your community organisation or school can access them. Visit www.masg.org.au/wasteless to find out more.
The most innovative use of business waste will win a prize! Send a photo of your creation from business waste to waste@masg.org.au by Friday 17 October to go into the draw.
For more information, contact Jay Smith, WasteLess Project Officer on 5470 6978 or waste@masg.org.au 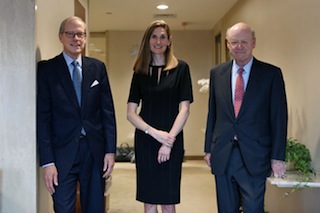 The family whose legendary wealth flowed from Standard Oil is planning to announce on Monday that its $860 million philanthropic organization, the Rockefeller Brothers Fund, is joining the divestment movement that began a couple years ago on college campuses.

Dudgeon Point is one of a number of multi-billion dollar Queensland coal export terminal proposals that have been relinquished over the last two years. This highlights the rapid deterioration in the global coal industry prospects, with key turning points this last month by China’s President Xi Jinping’s call for an “energy revolution”[i] and President Obama’s “Clean Power Plan”.[ii]

On Saturday Trevor Barrows from Charman, master distributor of Better Earth Products (BEP), gave a workshop to a small but interested group at Sandon.  Trevor is a long-time sustainability advocate and sustainable logistics consultant and provides technical support for the production and distribution of BEP products.

This was a trial exercise for macR before we launch into a larger program of community events. 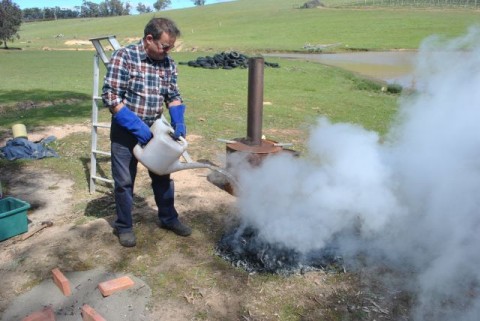 Biochar is an effective means of “closing the loop” by returning renewable organic feedstock or waste safely into the ecological life cycle.  The production and sequestration of biochar:

Fixed carbon is the portion of organic matter that is mineralised to a porous, carbon-rich structure during the biochar pyrolysis manufacturing process. Fixed carbon is resistant to decomposition, yet provides the pores and surfaces necessary for benefits of biochar to be achieved.

Unlike most carbonaceous matter in soil or composts, fixed carbon can last for decades, even thousands of years. This means the benefits to your soil will accumulate with time, while you are locking in carbon that would otherwise end up in the atmosphere as CO2. Every gram of biochar you use avoids the release of approximately 2 grams of CO2.

On Sunday MASG collected more than 250 signatures for the Monster Climate Petition.

“We will send the Petition to the Federal House of Representatives in time for the G20 Leaders Summit in Brisbane on 20 November,” said MASG’s Chair, Mick Lewin.

If you would like to sign the Petition in person, contact MASG on 5470 6978 or watch out for it at local markets and at the upcoming Ride to Work Event hosted by the Hub Foundation and MASG on 15 October.

If we do not change our negative habits toward climate change, we can count on worldwide disruptions in food production, resulting in mass migration, refugee crises and increased conflict over scarce natural resources like water and farm land. This is a recipe for major security problems.