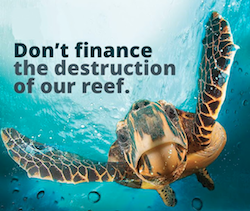 This is an extraordinary newsletter!

You already knew that, but we weren’t planning one for today, so in that sense – as well as every other – it is extraordinary.

Our last newsletter for the year will be published next week on Thursday, 11 December, so get your contributions in to us then, by 11am.

We wanted to let you know what the Castlemaine chapter of 350.org is planning for next Thursday with the local Commonwealth Bank, as well as a couple of other pieces of news. So read on.

Climate action against the Commonwealth Bank

Funding an environmental disaster in the making

Climate action is ramping up against Commonwealth Bank, who are arranging finance for Indian company Adani. Adani want to develop new coal mines in Queensland, and a new coal export terminal at Abbot Point in the Great Barrier Reef World Heritage Area.

The new mines in Queensland’s Galilee Basin would be the largest in Australia, and among the biggest in the world, at a time when the world-wide price for coal is collapsing and countries are abandoning coal holus bolus for renewable energy. 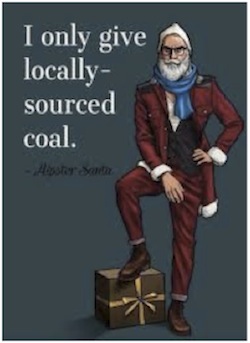 The ‘Christmas Cards for Commonwealth’ action will take place next Thursday, 11 December outside the Commonwealth Bank branch in Castlemaine, corner of Barker and Lyttleton streets.

There’s a rumour that Santa Claus will be there, and the entirely peaceful action will involve writing Christmas cards to the Commonwealth Bank Manager, asking her to rule out funding coal port expansion on the Reef.

Hope to see you there!

The Great Barrier Reef has halved in size over the last 30 years, and it is estimated it could halve again by 2022.

See you at the Commonwealth Bank, 3.30 on Thursday, 11 December!

Getting off the grid

The holy grail for those of us with grid-connect solar has been the desire to wave goodbye to the power companies. That prospect is now a step closer with a smart and versatile grid-connect battery system for less than $10,000.
To demonstrate how this technology works, Castlemaine Environment Shop will be running a free workshop on Wednesday, 10 December at 5.30pm  at 325 Barker St.

For more information or to book your place call  5472 4160. For a sneak peak watch our Founder and CEO Mick Harris in this short video:

https://www.youtube.com/watch?v=t9-Ejj0VUZM&feature=youtu.be
Casual Courier Needed
Do you commute to the city? Do you work near Northcote? Do you want your fuel paid for? Castlemaine Environment Shop is looking for a casual courier to bring stock up from our Northcote Store each week. Could this be you? If you want to earn some extra money from your commute give Frank or Jane a call on 5472 4160.

Come and volunteer with us, this Sunday at the Farmers’ Market. We have space for anyone who can give a few hours on Sunday morning at the Castlemaine Farmers’ Market to work on our Wash Against Waste Trailer.

People are gathering to show their concern about climate change.

#LightForLima vigils will take place as leaders gather for crucial climate talks in Lima in the first weeks of December.

All welcome to participate in the Castlemaine #LightForLima.