It’s been a white-knuckle ride here at MASG, with the newsletter coming out on a different day of the week for about the past three issues (ok, so we don’t get out much and have to look for excitement by altering our work schedule).

Bear with us! We’ve had a few teething issues, but we’re getting back into a regular groove.

The next e-news will be published on Thursday, 6 November, so get your contributions in to us then, by 11am. And Thursdays thereafter. 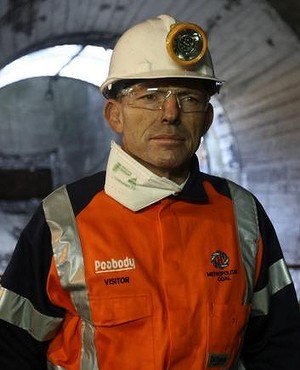 And our headline? Courage writ large?

Last week our Prime Minister said coal was good for humanity. This prompted Doctors for the Environment Australia to write to the PM, strongly rejecting his statements.

‘There is no justification for the pronouncement that “coal is good for humanity”.

It is in direct contradiction to all the available public health evidence,’ they wrote.

Increasingly fossil fuels are failing: even as an investment.

Read on to find out about the extraordinary, courageous actions of Pacific Islanders against this filthy and desperate industry in terminal decline – and a lot more besides: sustainable house day, renewables demos at the Show, retrofitting your home … 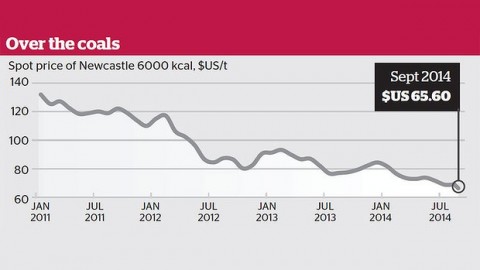 Biochar and Biodiesel at the Castlemaine Show 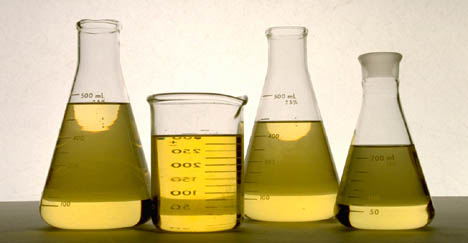 We’ve been working hard to bring demos of biochar and biodiesel to this region. With the Show weekend coming up, we have two demos we’re delighted to invite you to – biodiesel and biochar.

“The Prime Minister has recently tied all Australia’s future horsepower to fossil fuels, but most people know renewables are running a much different – and a winning – race,” said Mick Lewin, Chair of the Mount Alexander Sustainability Group.

“MASG has been mapping Mt Alexander Shire for potential renewable energy projects, and biochar and biodiesel have exciting potential locally.”

He said the visiting biodiesel specialist would demonstrate producing a viable fuel from canola and other seed, and a byproduct of that was a stockfeed and fertiliser.

“We are very excited to be trialling these two projects here. If local farmers start picking them up they have the potential to turn this shire into a renewable energy powerhouse, concurrently improving farm incomes,” Mick said.

We’ll look forward to seeing you at the Show on 31 October and 1 November!

On Friday night 31 October, 7.30pm on the Balcony at The Hub, our demonstrators will hold talks and show slides about their projects. $15 for food platters and buy your own drinks – this is a great opportunity to find out more about these potential on-farm income streams. Call 5470 6978 by Wednesday, 29 October, to book your place now. 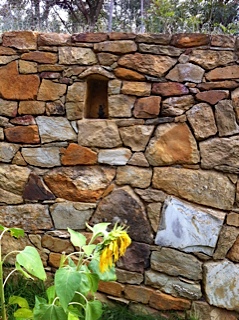 MASG’s popular tour of environmentally progressive homes is back! Be inspired by what locals have achieved and find out how they did it. This year’s theme is “Old For New” and features:

Register your attendance by calling MASG on 54706978 or on our website at masg.org.au/housetours 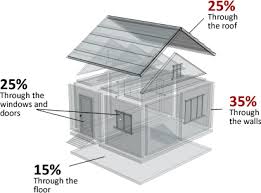 Have you recently bought a house that needs a little help?

Good for anyone thinking of renovating, owner-building, or reducing the cost of running your home. 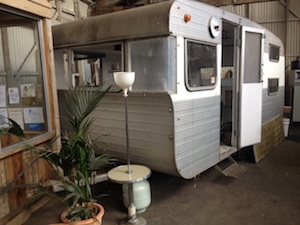 Three local residents who have turned waste materials from businesses into innovative creations were awarded this week as part of MASG’s Waste Less initiative. 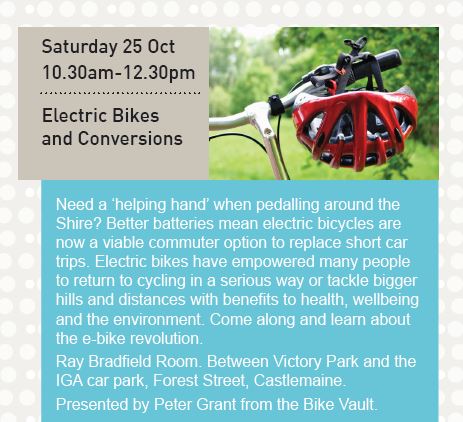 Need a helping hand when pedalling around the Shire? Come to the Ray Bradfield Room and learn about the electric bike revolution!

And while we’re talking bikes… 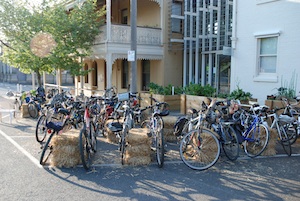 Ride to work a great success

Last week MASG jointly hosted a successful Ride to Work day with the Hub Foundation.  Riders came from out of town including from Bendigo to celebrate and enjoy the delicious free brekkie.

Thanks to our 10 volunteers who helped make it such a hit! 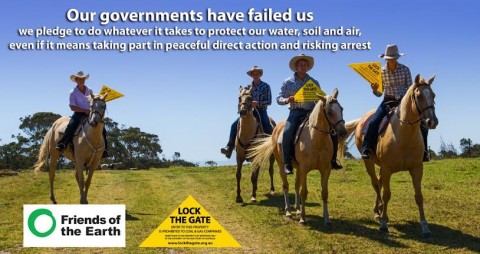 In Victoria, our government wants to open up new coal mines and shut down renewable energy across much of the state. But throughout regional Australia a new movement is building power and starting to win against the coal and gas companies and their friends in government. FoE want to share this good news story.

Across regional Victoria more than 70 communities have organised to oppose proposed coal mining and gas drilling. Already, 25 towns in southern Victoria have declared themselves ‘coal or gasfield free’. On average, the declarations have received 95% support.

Please join Friends of the Earth on Wednesday October 29 to hear about the growing community resistance. 6.15pm for a 6.30 start.

At the Comma, 16 Hargraves St, Castlemaine. Free event. Gold coin donation welcomeThe kitchen is open from 6pm. Please ring the Comma directly if you’d like to book a table 5472 2205.

Presented by Friends of the Earth, with the support of Mt Alexander Sustainability Group.

Sleep under the Stars at Hepburn 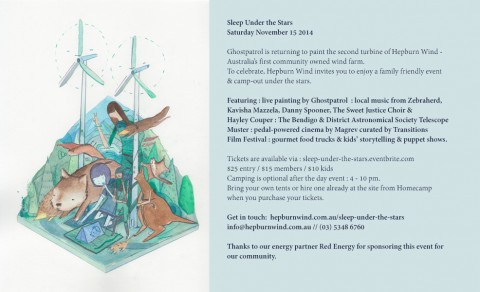 Come along to sleep under the stars, a family-friendly camping event on Saturday, 15 November. Hundreds of locals and wind farm fans can enjoy a beautiful and positive sensory experience of art, entertainment and clean energy at Australia’s first community-owned wind farm.

Gates open at 3pm for campers to set up, and the official event will run from 4-10.30pm.

Outside the Square – Kitchen Table Conversations for Change

This is it. Right now the future of solar is in the hands of only six politicians – and yours.

In the coming days three government ministers will sit down with three Labor ministers deep inside Parliament House in Canberra to decide the future of the Renewable Energy Target.

They’re meeting behind closed doors to discuss Australia’s most successful policy for solar and renewables – and with them preparing for discussions right now, we want you to show them Australia will be watching. 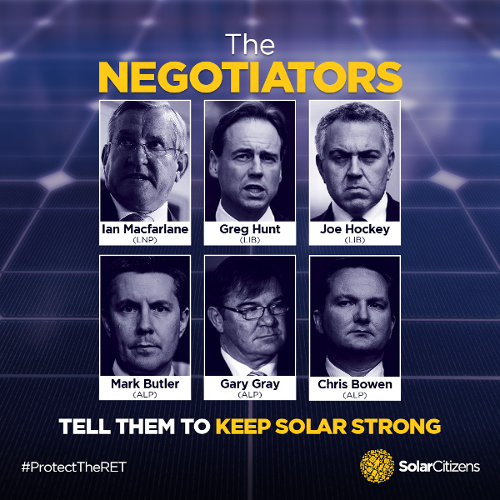 Tell our negotiators that you want them to stay strong for Aussie solar – take a minute to write your personal message on their Facebook pages:

You can send your Facebook messages by posting on each politician’s page or by sending them a direct message. When they see our messages popping up on their pages, there will be no doubt that our eyes will be on them when the negotiations get underway.

Now we need to make ourselves heard again so these negotiations result in protecting, not undermining, the Renewable Energy Target.

When it comes down to it, this decision is about the livelihoods of solar workers, the right of Australians to go solar and take control of their energy bills, and for Australians to take the power back from the government and big energy companies. 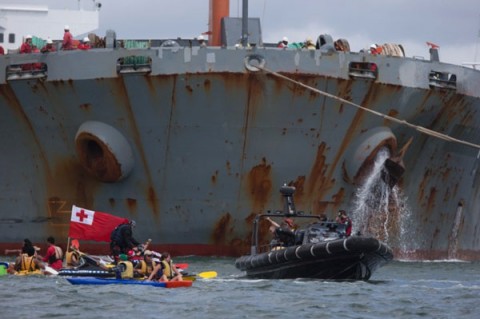 The people of the Pacific are not drowning, they are fighting. And the biggest threat to their homes is the fossil fuel industry.

Newcastle houses the largest coal port in the world, shipping around 560,000 tonnes of coal a day.

If the port were a country, it would be the 9th highest emitting country in the world.

On Friday, 17 October, the Warriors in hand carved canoes and dozens of Australians in kayaks, prevented 10 scheduled ships from passing through the Newcastle coal port. But most importantly, the warriors stood tall and their message was heard loud and clear: they are not drowning, they are fighting.

The action continues this week, and you can hear the story first hand from the Pacific Warriors this week – at one of the speaking events: in Perth, Brisbane, Sydney, Canberra and Melbourne.

For the hundreds of people who joined the Warriors, we thank you. As the Warriors continue their journey, help us tell their courageous story – share the Warrior’s story with your friends and ask them to stand with the Warriors. The Warriors will continue to fight, but they can not do it alone.

The courage of the Pacific Warriors was on full display as they came face to face with the fossil fuel industry threatening their homes.

The Sunday Age reported that the Napthine government has been forced to further delay its plans to open new coal fields in the Latrobe Valley. But only until after the state election.

We’ve had a win, but we need to remain vigilant.

The Coalition remains determined to pursue this if re-elected, and we still haven’t had Labor declare a clear position on new coal mines.

That’s why it’s so important that we reclaim the environment this election and let politicians know that you care. Have you signed the pledge to vote for our environment yet?

Our last word this week is not words but photos.

It’s courage, writ large, of Pacific Islanders confronting the coal industry that is threatening their homes. 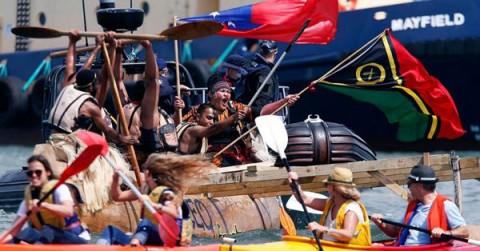 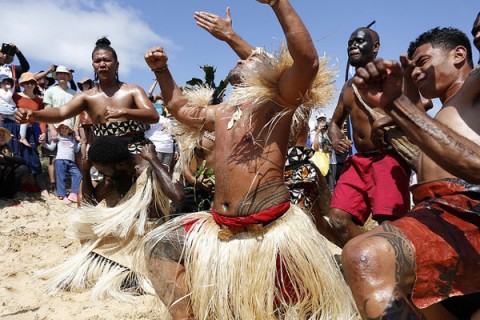