Clearly a lower Renewable Energy Target is better then no RET at all, allowing for some industry and investment confidence.

The Woodend Timber Mill project coordinated by the Macedon Ranges Sustainability Group, received a $100,000 grant from the Andrews government and aims to install an initial 30kW of solar PV. Using the mill tenants’ electricity payments to create a community renewables fund to add more panels in the future.

75 new wind turbines will be added the Ararat Wind Farm, in a $450 million project which will make Ararat the 3rd biggest windfarm in Australia.

Construction officially began on last week on the 19.8MW Coonooer Bridge wind farm, about 80kms north west of Bendigo. The lowest cost wind farm in Australia, and the first commercial project to have direct ownership from community members, is also the first new facility to get the go-ahead and begin construction since the election of the Abbott government in late 2013.

The study has also provided an assessment of assets available for renewable energy projects across the shire, which has informed the graphic below.

The project was clearly appealing based on an important and impending financial responsibility to reduce landfill waste.  There is also the very real opportunity for waste to be used as an energy resource, further saving money for businesses.

In the council meeting, Deane painted a picture for the Shire using circular and blue economy  examples.

A circular economy moves away from the linear “Take, Make, Dispose” industrial processes and the lifestyles that feed on them. Instead investigating a closed system, where there is no such thing as waste.  Biological and technical components of a product are designed for disassembly and re-purposing. Biological elements are non-toxic and can be simply composted. Technical nutrients – polymers, alloys and other man-made materials are designed to be used again with minimal energy.

The Ellen McCarthur Foundation are doing targeted research and their website is a wealth of knowledge in the area, including a report series highlighting the economic rationale for the transition to a circular economy – an opportunity in excess of 1 trillion USD for the global economy.

Similarly a blue economy considers systems and cycles, using the waste of one product as the input for another.  An emerging economic philosophy that aims to create a new kind of industrial revolution.

Christine and Phil have invited MASG to present the project more formally to all sitting Councillors and Council Directors.

Here is how it can be done: 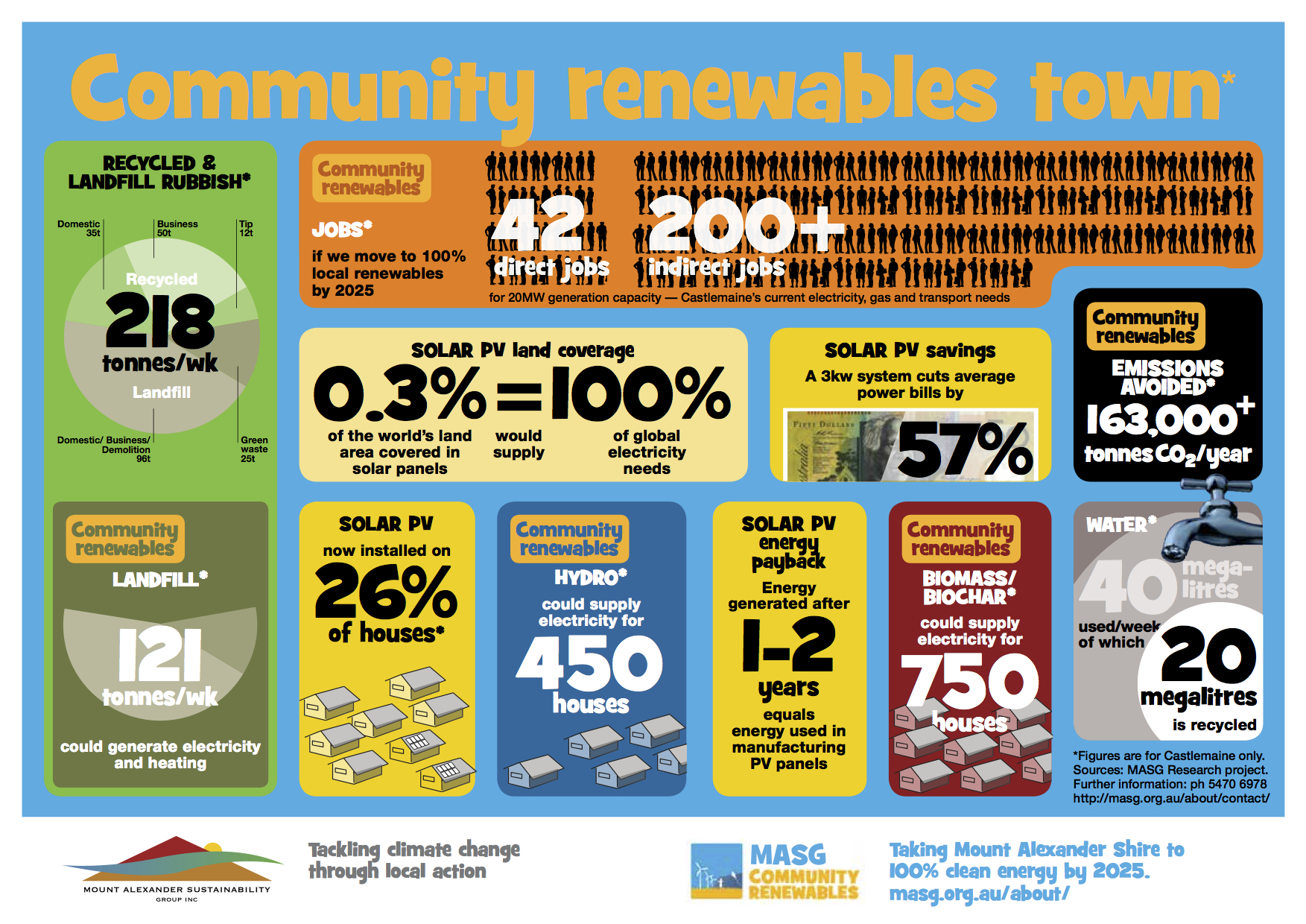 A simple trailer with a huge legacy

Did you know that there is only one other wash against waste style trailer in the whole of Australia?  A simple idea that carries a whole lot of weight, in the challenge to encourage events to consider reusable cutlery and crockery, reducing landfill and waste, whilst creating a glorious social engagement.

Wash against waste is saving the environment a total of 383 kgCO2e/day by replacing disposable cutlery and crockery (on the basis of 50% plastic and 50% paper products) with SS or melamine cutlery and crockery. That is equal to traveling a distance of ~1,277 km in an average car, and about the same distance traveling from Canberra to Brisbane.

Contact Helen at MASG on waw@masg.org.au or on 03 5470 6978 if your keen to book the trailer for your event or to get involved.

Sponsorship opportunities available if you fancy your business or organisation’s logo featuring at large. 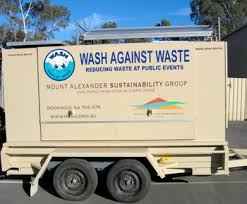 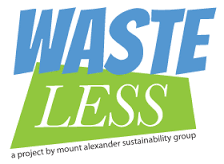 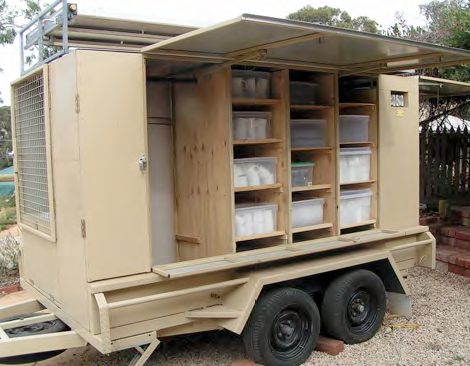 MASG invites all members, volunteers, and supporters to attend an informal catchup with Committee of Management members and staff, and other individuals and groups that support a sustainable shire.

Deane Belfield and David Woodgrove will be discussing MASG’s Waste to Energy Project at the August Sustainability Drinks.

Expressions of Interest are invited from individuals and groups that may like to informally present sustainability projects and initiatives at future Sustainability Drinks. Get in touch with Mandy or call the MASG office on 03 5470 6978 for more information.

The Mount Alexander Shire Council have released a new draft of their Environment Strategy 2015-2025, incorporating revisions from feedback and community workshops in April and May.

The strategy outlines the Shire’s eight environmental priority areas and incorporates feedback from the public comment period and community workshops held in April and May:

‘Specific changes to the strategy include adding commentary about the previous Environment Strategy, more detail around the scope of the strategy, and how it fits with the Council Plan and planning scheme. The value of recognising and placing greater emphasis on community partnerships and how they help meet the Shire’s environmental goals was seen as important.’

Council are inviting community members and organizations to book a time between 3.00pm and 7.00pm on Thursday 9 July 2015 to meet with staff and discuss this next draft.

To book a session please contact Dallas Giles, Healthy Environments Administration Officer, on 5471 1768 or via email. Further information can be found on the Mount Alexander Shire Council website.

Speaking at a event for the University of Cambridge’s Institute for Sustainability Leadership (CISL), of which he is a patron, Prince Charles said, “The challenge now is to go much further and much faster, progressively eliminating waste by developing a circular economy that mimics nature’s loops and cycles, rather than perpetuating our largely unsustainable and linear way of doing things,” he said.

Australian Prime Minister Tony Abbott has said he can imagine a future where the world no longer uses fossil fuels: “One day the coal will have been dug up, the gas will have been extracted, but we will always need food and our land forever.” However his government has repeatedly said it will seek to exploit as much of its coal and gas reserves as it can, even if demand for those resources is falling.

In a document prepared for the United Nations in readiness for the next round of climate talks in Paris later this year, China has stated its aim to cut its greenhouse gas emissions per unit of gross domestic product by 60-65% from 2005 levels. Where coal consumption still accounts for 66% of energy consumption, China is attempting to reduce its toxic levels of air pollution that are a result of its rapid coal-based economic growth. Premier Li Keqiang has stated that pollution is “nature’s red-light warning against the model of inefficient and blind development”.

The ‘inquiry’ into wind farms goes on, revealing more evidence

Members of the Association of Australian Acoustic Consultants (AAAC) told the inquiry into wind turbines just over a fortnight ago, that several studies have found no perceivable physical reaction to so-called infrasound.

There is no evidence to show that people are physically affected by low-frequency sound like that emitted by wind turbines, acoustic experts have told a Senate inquiry.

Meanwhile the Senate Inquiry also heard from the South Australian EPA who have found after a  two-month study of the Waterloo Wind Farm, that those concerned about the wind farm complained of infrasound noise even when the wind turbines were shut off.

The wind energy sector has undergone nine reviews or inquiries over the past five years.

The view of the AAAC and the EPA adds to a growing body of data indicating there is currently no consistent evidence that windfarms cause adverse health effects.

The National Health and Medical Research Council report released in February and a Sydney University review of 25 studies into the possible health effects of wind turbines, found none had produced evidence they were detrimental to human health and, in 2014, the Australian Medical Association issued a statement saying the available evidence did not support the idea that windfarm noise harmed humans.

(Not so) Slacktivism – Climate and Renewables action from your computer 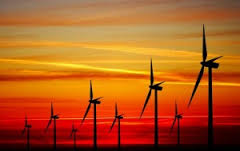 Right now, more than 70% of Australians get their electricity from AGL, Origin and EnergyAustralia – three of the biggest polluters in the country, with all three supporting or funding CSG and coal-based power. We can use our power as consumers to help support Australia’s renewable energy future.

Get-up shows you how here.

Sign an open letter to Prime Minister Tony Abbott and Opposition Leader Bill Shorten asking for stronger, meaningful climate action, which is in the national and global interest.

Premier Andrews we need a VRET

Put your support behind a VRET and sign Friends of the
Earth’s ‘Yes2Renewables’ campaign petition, calling on Daniel Andrews and the Victorian State Government to commit to a VRET and to show leadership on environmental issues.
http://www.melbourne.foe.org.au/leadership

Friends of the Earth are running a campaign calling on a fair senate enquiry into wind farms.
Sign the petition here: http://www.melbourne.foe.org.au/wind_inquiry_petition

Get your soil singing and hands dirty with this practical and comprehensive course. Learn the secrets of designing, creating and coaxing abundant growth from your edible food garden. From lawn to lunch or give your existing garden a makeover with fresh eyes.

This course is informed by permacultural, organic and biodynamic principles and will cover saucy subjects such as plant propagation, seed saving, compost making, worm farms, soil health, crop rotation, biochar, pest and disease prevention, pruning, natural beekeeping, chooks in the system, garden design, wicking beds, wild foraging and much more! Be prepared to rub shoulders with soil microbes and get down and dirty with garden design!

The course will run mostly on Fridays in Term 3 (17th July- 18th September) and 4 (9th October- 18th December) with the occasional Sunday session. List of dates to be confirmed.

Individual topics will also be available as stand-alone workshops but it is much more economical to sign on to the whole course.

To BOOK email Maldon Neighbourhood Centre on
info@maldonnc.org.au
or call 5475 2093

Attendee’s will also hear from landholder Andrew Skeoch, who is proud to share his life with wallabies, kangaroos, sugar gliders, even occasionally koalas, plus a wealth of birdlife including Square-tailed Kites that bred nearby last year, and the rare Painted Button-quail that he sometimes sees among the tussock grasses.

The sessions are aimed at people who are managing land in the local area, and who are also interested in improving their property’s conservation and/or productive values. Sessions all have specialist presenters, cover some basic theory and focus on practical information, skills and resources. 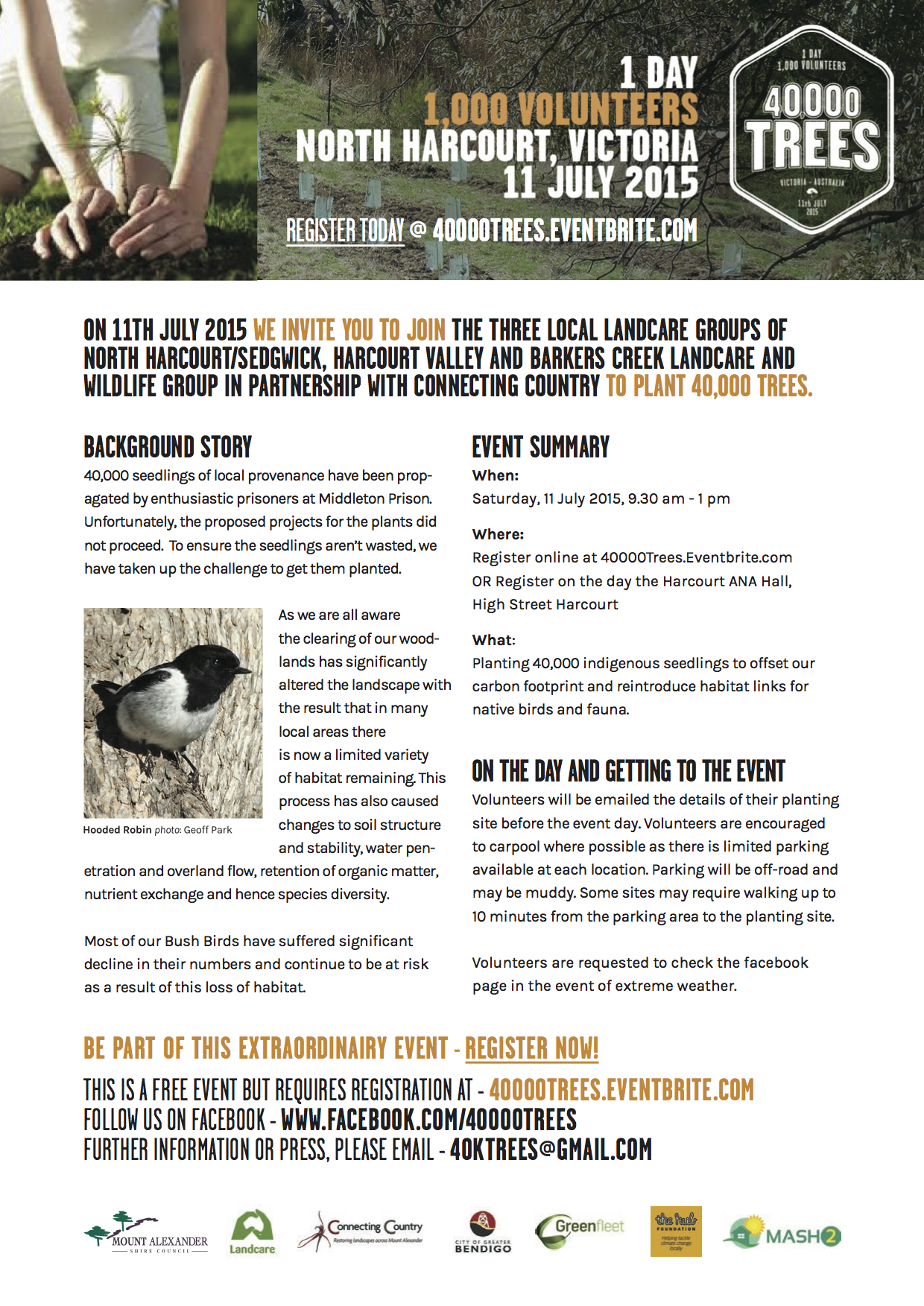