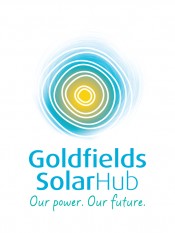 On Saturday over a dozen people gathered at the Christ Church Parish hall to hear the latest on the Goldfields Solar Hubs project. The project is now in round two, with new prices following the change in the Solar Credits scheme. Already over 300 people have had photovoltaic systems installed and Braemac representatives are very busy visiting clients for a measure and quote. There are over 700 people registered with the program and most are very keen to see their systems get established and connect into the grid. Braemac expects to visit the majority of people within the next two to three weeks. For those with panels installed, Solar Hubs is providing documentation on the expected process to become connected to the grid, which involves dealing with the retailer and knowing what happens when. Hard copies of the document were popular with participants and it is also available on the Goldfields Solar Hub website . Support is also available by ringing the office (Monday and Tuesday is best) on 5443 5244. Other topics discussed at the Sunny Session were:
• The feed-in-tariffs
• The likely review of the Premium FIT
• Becoming informed about personal electricity consumption to understand about an appropriate system size and how it would affect energy bills.
• The eventual phasing out of the Solar Credits program
• The ‘anti-islanding’ feature of inverters in PV systems
• Payment options
• What the warranty on solar panels means
• Why you should upgrade your household insurance policy when you get solar panels
There will be more Sunny Sessions so keep an eye on the MASG Enews for dates.
Mike Reeves.

The Sustainable House Tour will be held on Saturday Oct 15th and we are looking for this event to be a boomer…showcasing our Shire to visitors, providing attendees with valuable information and ideas and raising some needed $ to support MASG’s ongoing work of helping local people take action on climate change. But for all this to occur we need YOUR help.
Can you spare a few hours to do one of the following tasks on the tour day or leading up to it?

If you can help or for more information contact Carolyn on 54 70 6325 or kaz@masg.org.au Our street stall will be out again this weekend talking about renewable energy and why a price on pollution is important, and helping people write letters and make submissions in support of putting a price on pollution. It will be out the front of Stoneman’s Book room this Saturday  from 10am staffed by Ian and Dean. If you are interested in helping out for an hour or two on any Saturday please contact Dean on 0448 327 791 or dc@masg.org.au
Make a submission to the legislation by either downloading this quick sign and post sheet (75 kB) form_submission_on_clean_energy_package_0 or make your own with this short guide with suggested talking points (400kB) Make a submission about the carbon price legislation.

Green Renters believe that Renters are a growing and significant portion of the Australian population and deserve to be included in conversations on sustainable living. GR has a lively website full of articles and tutorials.

Community renewable energy in Australia is finally taking off

Tasmanian councils are considering a $22 million proposal to generate their own wind energy. The plan could cancel out their power bills by investing in four to seven 2MW turbines. No other Australian council has yet to generate a significant amount of energy. Read more in the Hobart Mercury.

Wind monitoring in  Woodend: MASG sister organisation in Woodend WISE  are making excellent progress on investigating the feasibility of a community wind farm in their area. The group has been awarded a $50,000 grant from Sustainability Victoria for a wind monitoring mast. The mast will go up in September or October.

Two communities in southwest WA are making an enormous difference to the footprint of their region. The Mt Barker wind farm is up and running with three wind turbines generating up to 2.4 MW.  And just 30 kms south, the Denmark Community Windfarm group are making great progress too. The group have just released a formal project offer document seeking to raise $3.5m to build two wind turbines at Wilson Head.

A Community Owned Solar Park in The Yarra Ranges:  community group Ranges Energy are getting excited about the imminent launch of their solar park project on the 23rd of August. They’re aiming to build an 80 kW system on the roof of a community building in the Dandenong Ranges. More info from Peter Cook pcook@wildcoast.net.au

Save the Kimberley – Melbourne Public Rally

Sunday 14 August, 12-3 pm, State Library of Victoria, 328 Swanston Street. The first mega gas hub planned for pristine coast and unspoiled wilderness will belch out 39 million tonnes of greenhouse gas emissions plus 66,000 tonnes of carcinogenic and toxic pollutants into the air each year! Total emissions from this project will amount to 6% of Australia’s total emissions. Find out more about their efforts from the Save the Kimberly website or if you want you can sign the petition to save the Kimberley here.

A survey of 1000 parents and children aged 10-16 showed that kids were helping their parents to reduce their carbon footprint with 46 per cent of parents saying their kids encouraged them to recycle rubbish and 27 per cent saying they were encouraged by their offspring to take shorter showers and 87 per cent said big polluters should pay for the damage. See the Herald Sun kids story.

Good news for cannery, and for sustainable tuna

The Safcol brand of tinned tuna has become the first well-known tuna brand to be ranked ”good” under the international Greenpeace ranking system due to a recent decision to switch to a pole-and-line fishing method, which spares the sharks and turtles that are otherwise caught and killed in tuna nets, along with the policy that it only catches skipjack, the least-threatened tuna species. Read more in the Sydney Morning Herald.

A Chinese company Yuneec is planning to sell electric aircraft with a range of 220km and with solar PV installed in the wings to recharge the batteries. Prototypes are in production and have had a Certificate of Airworthiness in the USA. Read more in Wikipedia.

Japan’s prime minister Naoto Kan renewed his pledge to help make Japan nuclear-free as Hiroshima marked the 66th anniversary of the US atomic bombing amid the Fukushima crisis, read more in the ABC or on the IndependentAustralia.

Weather extremes in the northern hemisphere

Following our wild and wet summer we are seeing a record Artic Ice Melt happening  and a Record heat wave in America.Following on record floods in Australia and the northern hemisphere’s cold spell we are now seeing a devastating heatwave sweep across North America.
Extreme heat has forced Nuclear Plants to cut their power production by 50% to avoid environmental sanctions because the water in the Tennessee River — where the plant’s cooling water is discharged — already was at 90 degrees F.

Australia could meet almost half of its 5 per cent by 2020 carbon emission reduction target if it stopped logging native forests, according to a new research report by the Australian National University.

Qoute: from those pesky Scots who keep coming up with great ideas!

“Scotland stands on the brink of a new energy revolution. Wind and wave can drive generators, waste can provide heat, and homes can be warmed from geothermal pipes. These renewable sources can power the nation for now and into the future – this is a revolution which will run for centuries. The more we develop them, the less we rely on carbon fuels and the greater our contribution to a sustainable planet for all. With this energy comes a new chance to grow our economy and improve our standard of living. Perhaps in the past the benefits of our land and water have flowed to too few, or been spent too quickly by governments in economic difficulty. This government believes the benefits should go to many, and be invested for long-term stability. We are a world leader in this field – let us ensure we also lead the world in the just distribution of the benefits.”
Richard Lochhead, Cabinet Secretary for Rural Affairs and the Environment, November 2010