Dozens of people gathered on the steps of the market building last Sunday, World Environment Day, saying YES to a price on pollution and YES to more support for renewable energy; like solar and wind power.

“A price on pollution is important for Australia but we know that on its own it won’t build more renewable energy,” said Mount Alexander Sustainability Group (MASG) Co-Chairperson Dr. Susie Burke. 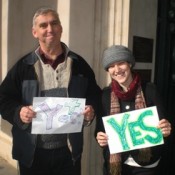 “In Australia we are falling behind the rest of the world in building renewable energy. Last year China was the biggest builder of wind power in the world and Germany lead with the greatest number of solar panels installed. Australia ranked 14th out of the G20 nations for investment in renewable energy, clearly not good enough” said Dr. Burke.

Stragglers who couldn't get out of bed on time say YES

MASG members have been having conversations with hundreds of Mount Alexander householders about renewable energy via door knocking and street stalls.

“We have talked to over 400 people and they have been telling us overwhelmingly that they want to see the government doing more on renewable energy. The carbon price is a golden opportunity for the government to delivery on this.”

Recently plans for new coal power stations in Victoria, like the HRL proposal, have been rebranded as clean or low emissions which is not the kind of development

People writing to politicians asking for money for renewable energy

people were saying YES to.

Jo and the boys say YES

“Fossil gas and ‘clean’ coal are not clean energy. If the government genuinely wants to see our economy transition to clean energy it must commit significant amounts of the carbon price revenue to funding development of new renewable energy like Solar or Wind power. In a large country like Australia we should be using our abundant solar, wind, waves and hot rocks to make clean power that will never run out” Said Dr. Burke.

The full results of the surveys of householders are being collated and the results will be presented to local MP Steve Gibbons later this month.