Renewable Energy & Regional Australia – Bendigo hosts a major National Renewables Conference on Mon 17th and Tues 18th September. Three MASG staff will attend. Dean will lead a workshop called “Beyond the Geeks – how we get conversations about renewable energy from the techno-geek chat rooms into the footy clubrooms and kindergarten foyers of Australia”, and Jane Knight will talk about the Hepburn Renewable Energy Association’s process to get a community owned wind farm approved, and what has made it a successful project to date. Jayson will be cruisin’ around doing networking. Places still available. Bookings 5434 6001 – Marlene Cream. There are Conference brochures at our office.

“Acting Locally for Climate Change – What Are the Most Effective Steps for Churches, Schools and other Community Organisations?” Agitation Hill Lecture, Anglican Church, Friday 21st Sept, 6pm. By Terry White, MASG committee member and founder of the Central Victorian Greenhouse Alliance. Terry is one of the best-known and most influential environmentalists and community activists in Victoria. After founding the CVGA in 2000, he spent the next six years working as its Executive Officer. The recent federal government decision to award a $20M Solar Cities grant for use in Central Victoria was a tribute to his fine work. Terry is an inspiring and entertaining speaker. In a break from the usual pattern, Terry will be introduced by his wife, Faye, well-known to many central Victorians for her organisation of Vocal Nosh in Newstead and Castlemaine as well as her many recordings. Wine and food will be served in the Church after the talk.

Finding Our Power: we need willing volunteers for the MASG open space technology forum on 19-20 October. Can you help before or at the event? We need two people with computer skills to assist with inputting information generated by discussion groups and three or more others to assist with general duties to ensure the event runs as smoothly as possible. This is a great opportunity to be directly involved in a very exciting community event. To help, please contact Jayson on 5470 6978. Open Space Technology is a simple way to run productive meetings, for five to 2000+ people, and a powerful way to lead any kind of organization, in everyday practice and ongoing change.

Local Food Production: Saturday’s working bee made great strides. We will have a second working bee this Saturday, any time between 8.30am and 12 noon; to complete the work started last Saturday. Long ladders, extension chain saw, trailers, secateurs, loppers are all most welcome. Contact Peter 5474 2403 or bundara@netcon.net.au

MASG Presentations: Last Monday, MASG speakers presented at the Baringhup Community AGM, and the Axedale Landcare group. Thanks to Luke and Dean.

Newstead 50: after Castlemaine 500 and MASG Tarrengower, it’s Newstead stepping forward to move to carbon neutral – contact Luke on 5476 2467 or bunyip@mmnet.com.au

ABC Australian Network filming in Castlemaine, Friday 21 September to get a story via SE Asian satellite network about the fundamental changes occurring in the Shire. Will be interviewing businesses involved in loco program, households involved in C500 and industries involved in CSIRO project.

International speaker on global warming in Castlemaine: The first event for the 150th anniversary of the Castlemaine Library: a free lecture by David Karoly, Professor of Earth Sciences at Melbourne University. Professor Karoly was on the panel that discussed the BBC documentary (which argued against climate change), some weeks ago on ABC television. Professor Karoly argued very strongly that the documentary misrepresented the issues.

Congratulations to Mount Alexander Shire who have won the Environs Australia Award – Outstanding Sustainability Partnerships, Rural Sector. This is for the Mt Alexander Footprints project. The Shire was also publicly commended for establishing partnerships with not only other government agencies, but also associations (eg CVGA) not-for-profits (such as MASG) ; industry (eg Castlemaine Bacon), Landcare etc.

1. Katherine Seppings: currently exhibiting a range of my photographic work at 145 Mostyn St., Castlemaine. The exhibition contains one room of photographs from France, Italy, Turkey, Nepal and Mexico, and another with images from Central Victoria and Coastal NSW. The work can be viewed Mon, Wed & Fri, 9am – 5pm or by appointment. Contact Katharine on 5472 2738 or Gabrielle Bertoni-Marshall 54 70 6888

2. FREE master class for local artists Sept 24 to 28 in Daylesford. Thanks to the Regional Arts Fund, artists in the area can benefit from a week’s intensive peer tutoring. Including drawing, painting and seminars, the week covers every aspect of professional practice from paint techniques through to enhancing creative flow. Limited to 25 places. Bookings: Basil Eliades on 5348 1855

WALK AGAINST WARMING: Sunday, two weeks before the federal election.

Permaculture Design Course (PDC) – Bendigo and Castlemaine 3rd until 17th Nov. The only Central Victorian (PDC) this year led by a wide range of experienced sustainability activists. Field trips to large and small gardens, a community garden, MASG, an eco-village and eco-homes. You will be challenged and inspired!

Blueprint for a Green Economy – The British Conservative Party’s ‘Quality of Life Policy Group’, chaired by John Gummer and vice-chaired by Zac Goldsmith, released their final report on Thursday morning. The Group have spent 18 months developing an agenda to make Britain a world leader on green growth. They have outlined a series of proposals to reduce pollution and improve the wider environment and quality of life.

“Why do you climb philosophical hills? Because they are worth climbing. There are no hills to go down unless you start from the top.” AND: “You and I come by road or rail, but economists travel on infrastructure.” 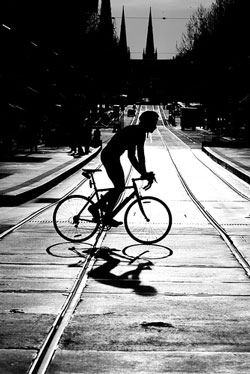